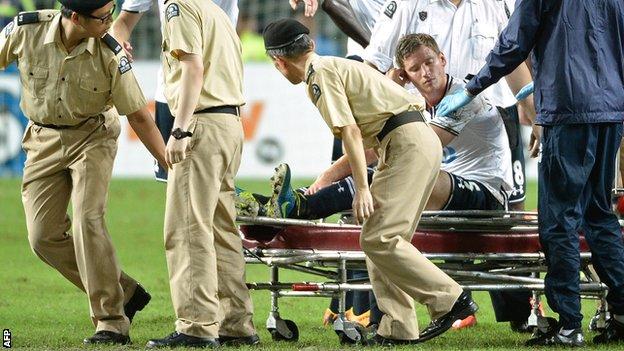 Tottenham defender Jan Vertonghen could be a doubt for the start of the season after being ruled out for up to three weeks with ankle ligament trouble.

The 26-year-old Belgian was carried off in the Asia Trophy defeat against Sunderland in Hong Kong on Wednesday.

"He's going to be most likely out of training for two to three weeks," Spurs boss Andre Villas-Boas said. "Hopefully we can have him back sooner."

He injured the anterior talofibular ligament in his left foot after slipping on a saturated pitch at the Hong Kong Stadium, sections of which were under water, shortly after being introduced as a second-half substitute.

"Jan is just about on the deadline for the first game of the season," Villas-Boas said. "Hopefully we can see a bigger recovery time with him."

Spurs play a third-place play-off match in the Asia Trophy against South China on Saturday and further heavy rain is expected in Hong Kong.

Villas-Boas added: "The conditions are extremely poor but there is nothing we can do about it. We've lost one player through injury - and if I can be sincere I would prefer not to go ahead, but that's the reality.

"It's our responsibility and if the authorities decide to go ahead, we will play the game."