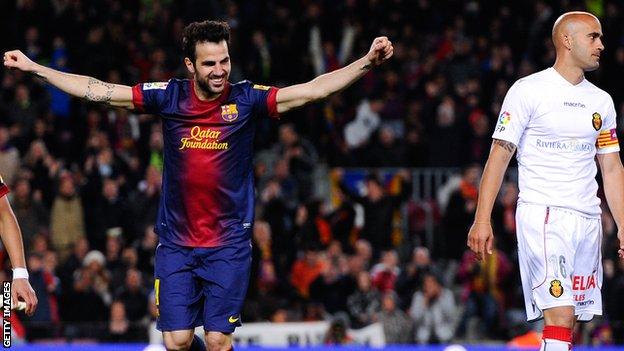 Barcelona vice-president Josep Maria Bartomeu has told Manchester United that they will not sell midfielder Cesc Fabregas at any price.

United manager David Moyes revealed on Thursday that the deal was "ongoing" but the Spanish club insist no offer will be accepted for the 26-year-old.

Bartomeu said: "United's interest for Cesc Fabregas is obvious, he's a great player but it does not bother us.

"It does not matter what they offer us, we are not selling him."

The Premier League champions have failed with two bids for the former Arsenal player, the latest of which is understood to be £30m plus add-ons.

"I'm not going to involve myself in the club's accounts, but considering the club has already rejected two offers, I would guess it will reject a third," Martino said.

"In other words, Fabregas will remain here."

United made their first move for Fabregas on 15 July by tabling a £25m bid and executive vice-chairman Ed Woodward then flew home from the club's Asia tour to try to secure his capture.

However, the Reds have now been told no matter how much they bid, the Spanish champions will not listen to offers.

"If there was a higher offer would we accept it? No. We're proud that a club like that wants one of our players," added Bartomeu.

Fabregas has played 96 times for Barcelona since joining from Arsenal in 2011, including 60 league games, but has rarely featured in his preferred midfield role, with Xavi, 33, and Andres Iniesta, 29, ahead of him in the pecking order.