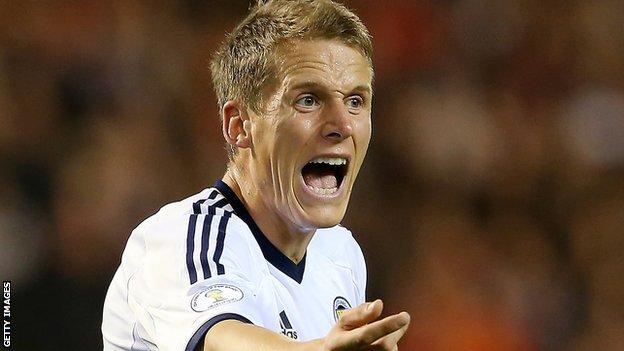 Ipswich Town defender Christophe Berra has said he considered a move to Rangers before signing for Mick McCarthy's side.

The 28-year-old had been a target for Rangers boss Ally McCoist.

"They're a massive club. I just wanted to stay down in England," he told BBC Radio Suffolk.

"I'm only 28 and I've got my peak years ahead of me. I wanted to come here and push for promotion to the Premier League, where everyone wants to be."

Berra has been re-united with McCarthy, his boss at Wolves, where he played 153 games, 100 of which were in the Premier League.

And the centre-half, who signed a two-year deal at Portman Road, is hoping to rekindle his Scotland career and further add to his 27 caps.

"I've played quite a few games for Scotland and I want to get back into the squad," he said.

"My aim is to get into the Ipswich team by getting fit and with good performances get back in with Scotland to play in the European qualifiers."

Fellow new signing Frederic Veseli has also outlined his international aspirations, but the Swiss full-back has yet to make his full international debut.

"My first goal is to get into the Ipswich team. I will work as hard as I can to do that and see what happens.

Veseli has still not made a professional appearance in England, but has said he is ready to make the step up after a season of youth football last term with United.

"It was all under-21s and while you try to put your own sense of competition into it it's never the same as the league," he said.

"It's time for me to move on, get some experience and play some professional games."