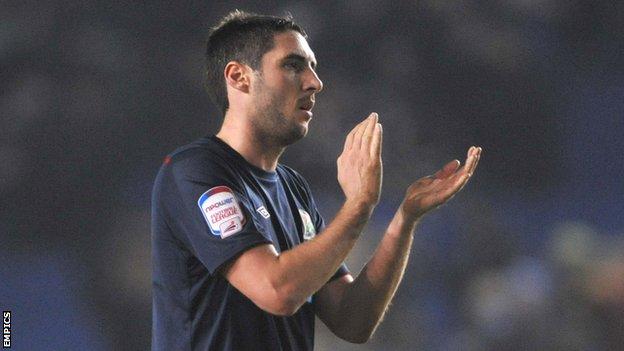 David Dunn hopes full-back Bradley Orr can win over Blackburn's supporters and will not be forced out of the club.

Midfielder Dunn feels some fans turned on Orr after he following their relegation from the Premier League in May 2012.

"It took a lot of guts to put himself in that firing line."

He continued: "Quite a few fans had a pop at him for that. Me personally, I feel we need strong characters like Bradley Orr at our club.

"Unfortunately he might be having to move on because some fans and himself personally feel like his job's done here and he can't win anyone back. I think that's a crying shame."

Ex-Bristol City and QPR defender Orr, 30, made a total of 22 appearances for Rovers last season, either side of a midway through the campaign.

Meanwhile, Dunn is confident that the will give Blackburn the stability they have been lacking in recent seasons.

Five different men took charge of the club in 2012-13 and, in a second spell as caretaker boss, Bowyer guided Rovers to safety on the final day of last term.

"I'd like to see a bit of stability at the club after the last few years we've had," added Dunn, who recently

"Maybe we're at a point that we need to give the manager some time.

"Gary knows the club inside out and he's been here a long time now. I'm 100% sure that he knows what exactly he wants to get in place and that will only happen if he's given time."

Blackburn midfielder David Dunn was a studio guest on the 25 July edition of BBC Radio Lancashire Sport with Andy Bayes - listen again via the BBC iPlayer.