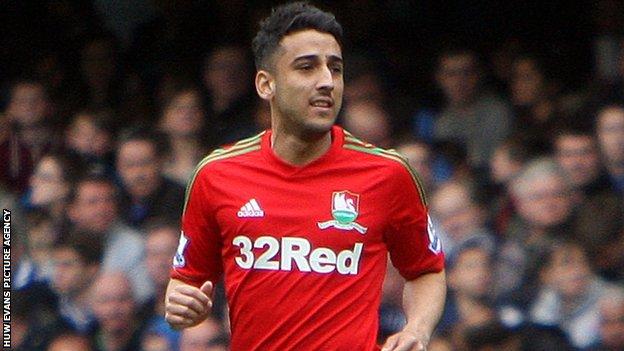 The Swedish club face the Swans in the third qualifying round after crushing Hibernian 9-0 on aggregate.

And full-back Taylor believes Swansea must make the most of home advantage in the first leg on 1 August.

"Hopefully with our Premier League quality and them coming here to our fans and our place... we can get a good start and go from there," Taylor said.

Malmo clinched their date with Swansea thanks to a 7-0 destruction of Hibs at Easter Road after winning the first leg 2-0 at home.

Welsh international defender Taylor believes the scale of the win is a warning to Michael Laudrup's team.

Another concern for the Welsh international defender is that the first leg at the Liberty Stadium will be Swansea's first competitive match of the season.

Malmo, by contrast, have played 16 games in their domestic season and are currently second behind Helsingborg.

"They're pretty much into their season now so they'll be sharp and playing regular competitive games, so we're going to have to be ready from the off and get a good result at home to start with," said Taylor.

"It gives them an advantage I suppose because they're in the swing of things.

"We sort of knew it was going to be them from the first leg and they've obviously done really well in the second leg.

"So it'll be a nice trip to go to Sweden and play there and a good first taste of Europe."

Swansea are playing in Europe for the first time since 1991, having claimed their place by winning the Capital One Cup last season.

Taylor missed most of the 2012-13 season after breaking and dislocating an ankle against Sunderland on 1 September.

But having watched the team qualify for Europe, Taylor believes it is imperative the Swans progress to the group stages.

But in order to do that Swansea must beat Malmo and then get through a play-off later in August.

"There's been a lot of talk about Europe over the past three or four months and the fact that we've got there," added Taylor.

"You don't want it to be an anti-climax in some ways [and we] want to get to the group stage.

"Then you've got a definite amount of games and the fans can go all over Europe and enjoy seeing people come here as well.

"But the sole thing we're thinking of at the moment is that first game here [against Malmo]."