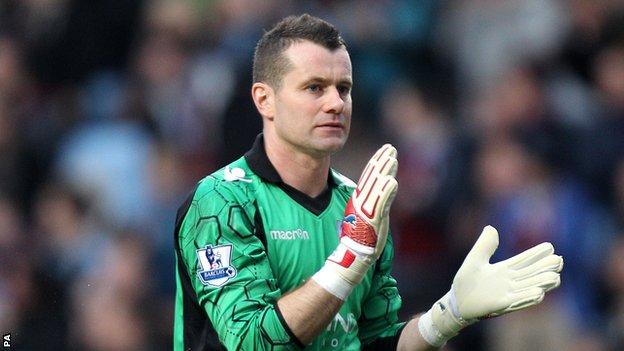 Doncaster Rovers boss Paul Dickov has confirmed the club have made loan enquiries for Aston Villa's Shay Given and Southampton's Billy Sharp.

Republic of Ireland goalkeeper Given, 37, has fallen behind Brad Guzan in the pecking order at Villa Park.

And Sharp, who hit 41 goals in 86 games in a previous spell at Rovers, spent last term on loan at Nottingham Forest.

But Dickov told BBC Radio Sheffield they were still "waiting to hear back" from the clubs of both players.

"We did make an enquiry to take Shay on loan a couple of weeks ago," Dickov said of the former Newcastle and Manchester City player.

"And Billy is somebody who's highly thought of at the club. A loan enquiry did go in a couple of weeks ago."

People are putting two and two together possibly with Stephen [Ireland] being a friend of mine, but there's been no approach made for him

Sharp left the Keepmoat Stadium for Southampton in 2012 and helped the Saints earn promotion to the Premier League.

But after just one top flight appearance, he was loaned out to Forest, where he made 40 appearances, scoring 11 goals and now Doncaster are interested in bringing him back to the club.

Dickov denied rumours that he is interested in signing his former Manchester City team-mate Stephen Ireland, who is at Aston Villa alongside Given.

"Stephen's not been mentioned," he said. "People are putting two and two together with Shay and possibly with Stephen being a friend of mine, but there's been no approach made for him."

Meanwhile, midfielder Richie Wellens is training with Doncaster with a view to a possible move, after agreeing to have his contract cancelled at Leicester.

"Richie first and foremost is a fantastic footballer. We can talk about how good he is on the pitch and in training, but he's a winner as well and has fantastic experience with him," Dickov said.

"He is somebody who can definitely make the team tick and win a game for us."

Dickov also confirmed that summer signing Marc de val Fernandez, a former Real Madrid C midfielder, will be out of action for 10 weeks with torn medial ligament damage, but will not require surgery.

"The specialists are saying 10 weeks, but knowing Marc and the determination he's got, he's already telling me he's going to be early, but that's the sort of kid he is."