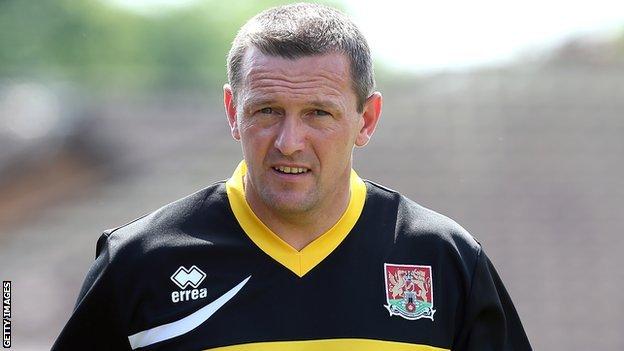 Northampton Town boss Aidy Boothroyd has said his side are not yet ready for the upcoming League Two campaign.

The Cobblers have signed five players this summer, with JJ Cooper and Gary Deegan the latest additions, but Boothroyd wants to bring in Kevin Amankwaah and a striker.

"We're not ready for the season," he told BBC Radio Northampton.

"I've got a right-back to organise - Kevin is looking a strong favourite there. And we need another frontman."

Amankwaah, 31, was released by Exeter at the end of last season after playing 36 games for the Devon club and featured in Northampton's 3-1 friendly win over Corby on Thursday.

Former Newcastle United forward JJ Cooper's arrival takes Boothroyd's number of senior strikers to three, with Roy O'Donovan and Clive Platt on the books, but the Sixfields boss is searching for a fourth.

"It would be great if I'm in the position with four frontmen," said Boothroyd.

"We do need to score goals. I think we're going to be more fluid, a faster, more mobile team.

"But we're going to struggle in terms of depth. We've gone back to the old days of a small squad with quality."

Northampton also have forward Alex Nicholls, who is continuing his recovery from a broken leg.