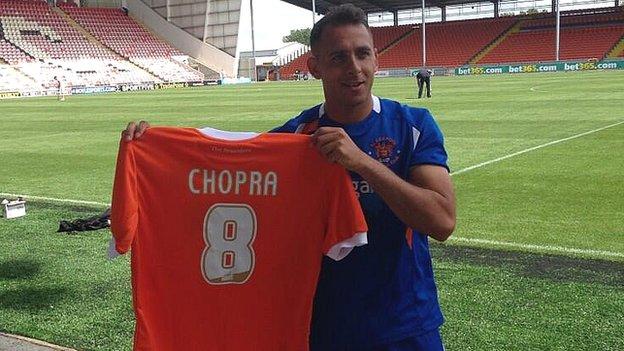 Michael Chopra sees his move to Blackpool as a fresh start after ending a mixed two-year spell at Ipswich.

The ex-Newcastle and Sunderland striker was told in May that he was despite having 12 months remaining on his contract.

Chopra was close to finalising a move to Barnsley before signing a one-year deal with the Seasiders on Thursday.

"I'm at a club where I'm wanted. It's nice to be wanted again," the 29-year-old told BBC Radio Lancashire.

The manager is looking to bring a couple more players in and if we can get the right balance, this club is going places

Chopra netted 19 goals in 82 games for the Tractor Boys.

While his scoring record - particularly at Championship level - has rarely been questioned, a has often taken attention away from his efforts on the field.

"No matter what I do, it's always going to be in the spotlight," he said.

"It's down to me to do well on the pitch. If I'd been scoring on a regular basis for Ipswich, nobody would talk about it. It's down to myself to make sure it doesn't happen again.

"With the gambling, I still go to meetings and that's an ongoing process. The main thing for me is that I'm at a football club where I'm going to be playing and I'm made to feel welcome and wanted.

"When you're playing well on the pitch, everything else takes care of itself."

Chopra is one of four players to have agreed moves to Blackpool this summer, with confirmed on Friday, and Chopra believes goals will not be hard to come by at his new club.

"You've got Thomas Ince and also Matty Phillips to come back when he's fit," he added. "The manager [Paul Ince] is looking to bring a couple more players in and if we can get the right balance, this club is going places.

"When you're playing with good players, you know you'll get a lot of chances to score goals.

"I believe that if I get the chances, I will score goals. I've done that all my life."