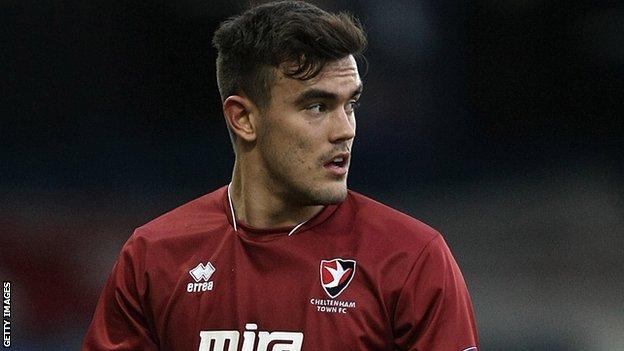 Midfielder Marlon Pack has joined Bristol City on trial after failing to agree a new deal at Cheltenham Town.

Pack is out of contract at Whaddon Road and although Cheltenham continue to pay his wages, the 22-year-old has been training on his own during pre-season.

The League Two club will be entitled to a fee for the player under the Bosman ruling, as he is under the age of 24.

Pack, who also attracted interest from Crawley, will play for City on Saturday in their friendly against Bournemouth.

"We've talked to Cheltenham about his situation and they've given him permission to play, we just need to sort out insurance issues," Bristol City head coach Sean O'Driscoll told BBC Radio Bristol.

"I haven't seen enough of him to sign him yet. There's a fee involved and the days are gone where we just turn up and spend this and that.

"We have to make sure we do our homework. He's got a good pedigree and has done exceptionally well for Cheltenham. There's lots of things to overcome, but he's keen to get playing."

Pack's trial comes after City confirmed midfielder Liam Kelly would be ruled out until after Christmas with a knee injury.

A former Portsmouth trainee, Pack has been with Cheltenham for three years and has made 145 appearances.

He was close to a move to Swindon in January, but the deal fell through because a takeover at Town had not been completed.