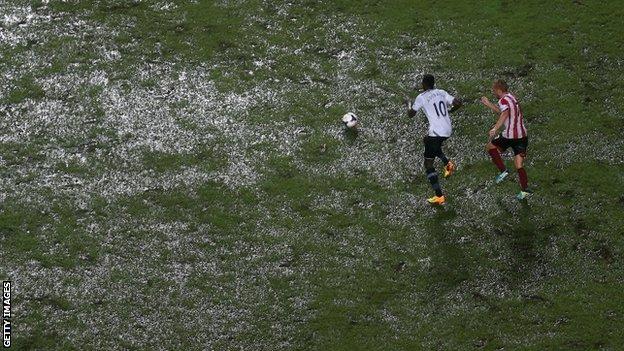 Manchester United boss David Moyes says he is worried about the state of the pitch at the Hong Kong Stadium, where his side are due to play on Monday.

Hong Kong has been hit by heavy rain and the surface has been described as a "killer pitch" by Sunderland manager Paolo Di Canio.

"I do have concerns about the surface," Moyes admitted on Friday.

Speaking after United's 2-2 draw with Cerezo Osaka, Moyes added: "It is mainly due to the weather."

Torrential rain created atrocious conditions underfoot during Spurs' Asia Trophy match against Sunderland and Belgian defender Vertonghen picked up the injury shortly after coming on as a second-half substitute in a game that was reduced to two 40-minute halves.

Di Canio said at the time: "It is a killer pitch with this weather, it is dangerous, at this stage of the season especially."

Moyes, whose side face Hong Kong outfit Kitchee FC on Monday in the latest leg of their Asia tour, said: "We will travel to Hong Kong and hope the conditions improve and the pitch is in a better state than it has been in recently."

The United boss also confirmed that midfielder Shinji Kagawa would not fly to Hong Kong.

The 24-year-old Japan international ended his holiday prematurely in order to feature in both pre-season matches in his home country.

However, the manager believes Kagawa needs to complete his break after featuring in the Confederations Cup in Brazil.

"We have given him more holiday because of his football with Japan in the summer," said Moyes. "We try to give all the players four weeks' holiday if possible."