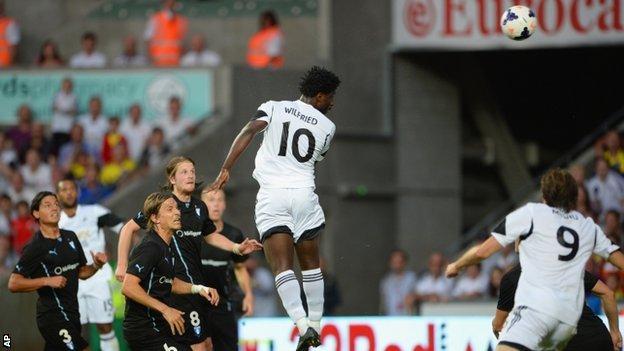 Wilfried Bony struck twice in his first competitive game for Swansea City as they took control of their Europa League tie against Swedish side Malmo.

Michu took advantage of a slip from Filip Helander to curl home the first.

Bony headed in before poking in after Michu's shot hit the post.

A fourth goal from Alejandro Pozuelo - one of five new signings who made their debuts - gave the hosts a huge advantage for next Thursday's second leg of this third-round encounter.

As well as the result, Swansea manager Michael Laudrup will be equally as pleased with the way his new signings appear to be gelling.

Wilfried Bony in the flesh

Bony took his two goals well and interchanged impressively with last season's top scorer Michu, who is now able to pounce from an advanced midfield role with Jonjo Shelvey, signed from Liverpool, driving on the Capital One Cup winners from a more holding role.

In defence Jordi Amat, a £2.5m signing from Espanyol, snapped in the tackle and looks to be useful back-up to first-choice pairing Ashley Williams and Chico Flores, who was fit enough to be named on the bench after recovering from an injury sustained during pre-season.

Swansea were making their return to European competition after a 22-year absence, partly due to Uefa's ban on Welsh clubs in the English football pyramid representing Wales and also because of the club falling on hard times.

Back in the 1991-92 season the Swans were in the old Third Division and suffered a 10-1 aggregate defeat when they came up against French giants Monaco in the European Cup Winners' Cup first round.

Laudrup's side are now firmly established in the Premier League and the Dane was able to field club record £12m signing Bony for his competitive debut, the Ivorian taking the target man role in attack.

Malmo arrived in south Wales already battle-hardened, 17 games into a season that sees them second in the Allsvenskan and having thumped Scottish Premier League side Hibernian 9-0 on aggregate in the previous round.

But Swansea soon settled into their smooth passing rhythm, although Malmo looked comfortable conceding possession and waiting for the opportunity to counter with Tokelo Rantie looking particularly dangerous on the left wing.

Despite Malmo defending deep, Swansea's pacey forwards were lurking on the shoulders of the defenders and Nathan Dyer stole in behind from Williams's long pass to force a smart reaction save from Johan Dahlin.

But the Malmo goalkeeper was given little chance when Michu opened the scoring on 37 minutes, curling the ball in off the far post after Helander had slipped trying to intercept Wayne Routledge's pass.

Malmo troubled Swansea after the restart, first Jiloan Hamad sending a free-kick just wide after good work by South African winger Rantie and then Magnus Eriksson having a decent penalty appeal turned down after Amat seemed to make contact.

But just as the Swedes were showing signs that they could claim an away goal, Swansea hit them twice in quick succession.

Ben Davies snapped into a tackle in midfield to win the ball and Angel Rangel picked a first-time pass into the feet of Michu, only for the Spaniard to hit the far post.

But Bony had been following up and stabbed the ball into the net for his first goal for his new side.

The Ivory Coast striker doubled his tally within four minutes, pulling off his marker to flick a header into the far corner when Routledge served up a delicious chipped cross.

Four minutes from the end midfielder Pozuelo, signed from Real Betis, came off the bench to surely put the tie beyond Malmo, taking a return pass off Bony to mark his own debut with Swansea's fourth.