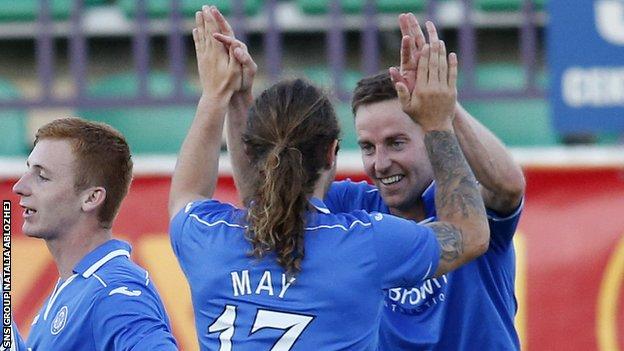 St Johnstone's good away form continued with a narrow victory in their Europa League third qualifying round first leg tie against FC Minsk.

Stevie MacLean struck with almost 70 minutes on the clock in Grodno to give the Perth men a valuable away goal.

Mikita Bukatkin was unlucky for the hosts in the early stages with a shot that fizzed wide.

Murray Davidson provided an attacking threat in the second half as Tommy Wright's men held out for the win.

Having already knocked out Norwegian side Rosenborg, the Perth outfit followed that feat up with an impressive success in Belarus.

MacLean bagged the winner with 22 minutes left in Grodno - 140 miles west of the former Soviet state's capital, where Minsk's stadium is being redeveloped - to put Saints on course for the play-off round.

Visa delays and expensive air fares meant the Perth side travelled behind the former Iron Curtain with just one solitary supporter for backing - an exiled Scot living locally.

Minsk threatened within the opening moments when Roman Vasilyuk teed up Nikita Bukatkin with a rolled cut-back but his drive from 22 yards was off target.

Bushma had to punch clear from Tam Scobbie's cross as David Wotherspoon lurked at the back post while Nigel Hasselbaink tempted Minsk right-back Aleksandr Sverchinski into collecting the game's first booking with two fouls inside as many minutes.

A Milos Rnic trip on Wotherspoon seven minutes before the break set up MacKay to pick out Hasselbaink with a free-kick but the Dutch forward shot straight at Bushma.

Minsk midfielder Sergei Kozeka saw a decent opportunity blocked by Steven Anderson just seconds into the second half as the centre-half bravely stood his ground.

Murray Davidson's return to the Saints side - after re-signing last week - came just four minutes after the restart and the Scotland international made an immediate impression, coming close with a pair of headed opportunities.

Bookings for Wotherspoon and MacKay gave St Johnstone reason to be wary as Polish referee Marcin Borski proved to be overly officious but an offside flag soon came to Wright's side rescue as Dmitri Gorbushin looked to gallop through on Allan Mannus in the Perth goal.

The hour mark brought about another decent opening for Saints as Wotherspoon drove in from the left-hand side but Hasselbaink failed to read his low cut-back as the forward dashed into the Minsk box.

But within eight minutes St Johnstone had edged themselves in front as MacLean, collecting Liam Caddis' pass, took advantage of space in the box to shoot early on the right-hand side of the box, burying the ball under Bushma.

Some desperate defending was required in the final minutes as Minsk threw a couple of worrying crosses into the Saints box but Mannus and his back four stood strong to ensure they return home packing another impressive result.