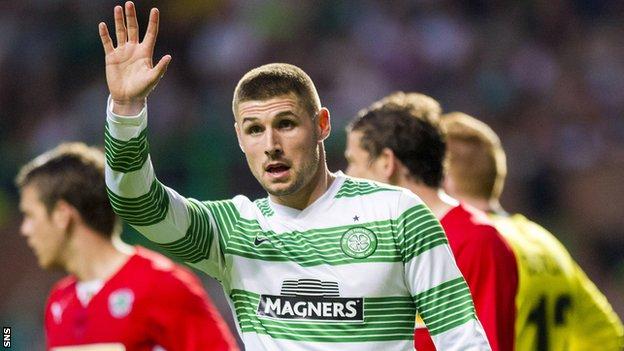 Neil Lennon has described Gary Hooper as Celtic's best striker since Henrik Larsson and says the Englishman will be a great loss after his move to Norwich.

The Celtic manager was speaking before .

"I think he's been the best striker here since Henrik and he will be a huge loss to us," said the Celtic manager.

"He has been one of my best signings in so many ways - for value for money, improvement, goals and link up play."

Part of me wants to strangle him, but you don't want to stop the progression of some individuals

Hooper has been the Scottish champions' top scorer for the last three seasons since joining for £2.4m from Scunthorpe United.

But, having been on the fringes of the England squad, the 25-year-old rejected the offer of extending his Celtic contract beyond the end of this season.

"He came to me during pre-season in Germany and was honest enough to say his ambition was to play in England," said Lennon.

"I wish him well. Part of me wants to strangle him, but you don't want to stop the progression of some individuals.

"In Gary's case we couldn't offer him the same sort of package as Norwich. That's just the reality of where we are at the minute.

"If we can consistently get Champions League football over the next four or five years, that outlook might change, but the days of competing with Premier League clubs for fees and wages are not here at the minute anyway."

Having failed in a bid for Hooper in January, Norwich secured their target after matching for the Englishman.

Lennon, who has already added former Portugal Under-20 striker Amido Balde from Vitoria Guimaraes this summer, says Hooper's departure heightens his search for a forward.

"We're trying to push the button on one or two players," he said. "We've brought three players in, but an attacking player is a priority now.

"We're looking and looking, it's not as easy as everyone thinks.

"Yes, we have brought in a lot of money but we have to safeguard the future of the club as well.

"We have to be mindful of that when we go into negotiations with players. Some of the prices are too much, some of the wages are too much and sometimes players are happy where they are."

Lennon gave little away on whether he would return for Wolves striker Kevin Doyle following a failed attempt to sign the Irishman in January but did confirm he had watched Evian striker Saber Khelifa and that the Tunisian was an option, before adding that he had a "list as long as your arm".