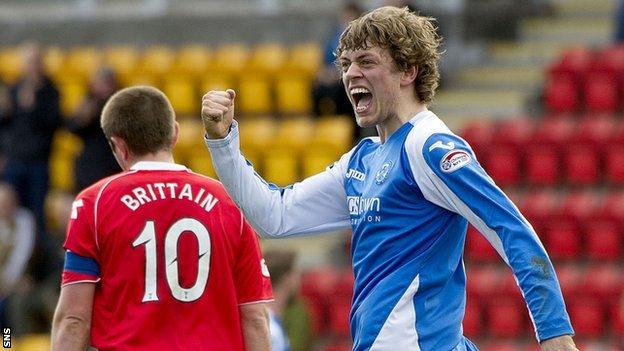 Murray Davidson has rejoined St Johnstone after the midfielder failed to find a club in England.

The 25-year-old, who had previously attracted interest from Rangers, has signed a new one-year contract.

, whose side , told his club website: "It's great news for the club.

"He put pen to paper yesterday morning before the Europa game and it's great to have him back."

After last night, there's even more good news for the club getting @Murray8Davidson to sign on with us again. #topplayer

Davidson signed a three-year contract with Saints after leaving Livingston in 2009 and won his only Scotland cap so far a year later.

"It's no secret that Murray had indicated that he wanted to play in England and I can fully understand why," said Wright.

"But he was always in touch with the chairman and I over the summer and he told us that if nothing came his way down south then Saints were the only team in Scotland he would sign for."

"After last night, there's even more good news for the club getting @Murray8Davidson to sign on with us again. #topplayer," he said.

Davidson also tweeted that he "will be playing some part" in Saturday's friendly against Morecambe.