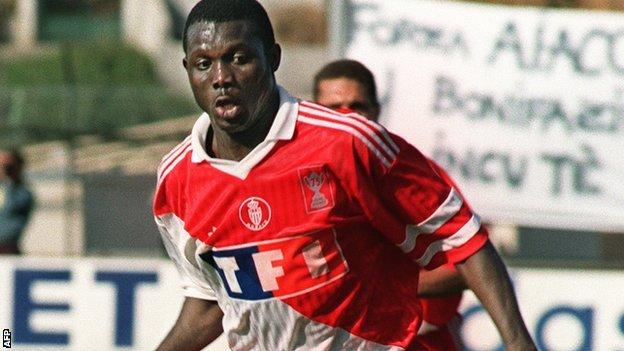 Swansea City will be making their Europa League debut against Malmo on Thursday, 1 August - but it will not be the club's first experience of European football.

As Welsh Cup winners, the Swans competed in the old European Cup Winners' Cup seven times over 20 years, between 1961 and 1991.

It is possibly only now that Swansea can fully appreciate the star-studded AS Monaco side they faced over two legs in that 1991 first round.

The French Cup winners were managed by Arsene Wenger, then largely unknown to British football fans.

His side included future Fifa World Player of the Year George Weah, Youri Djorkaeff and Emmanuel Petit, who would reunite with Wenger at Arsenal six years later.

Monaco were 2-0 up in the first leg at the Vetch through a Gerald Passi penalty and a Rui Barros goal before Andy Legg pulled a goal back for Swansea with 20 minutes remaining.

"I think I got lucky," former Wales international Legg recalled of the goal he scored.

"I think I intercepted a back pass, went straight to my feet and went round the goalkeeper and managed to put it in.

"It was a fantastic occasion and it was a great atmosphere at the Vetch that night. It was bouncing.

"When you look back on the names that were on the Monaco team sheet, it was incredible we kept it to 2-1."

Legg admitted he and his Swansea colleagues at the time knew very little about their more illustrious opponents.

But the then Third Division side endured a torrid night in the second leg at the palatial Stade Louis II, with Weah scoring twice in an 8-0 victory.

"We probably didn't respect how good they were," Legg told BBC Wales Sport's The Back Page programme.

"But we soon had our comeuppance when we went out to Monaco.

"I roomed with Steven Jenkins at the time and the night before the game out in Monaco, he said: 'I really fancy our chances.'

"And after the game, and we laugh about it now, he said to me: 'I didn't see that one coming!'

"But you only have to look back at the names and what a side it was.

Monaco's run would take them to the final, where they lost 2-0 to Werder Bremen in Lisbon. Swansea, in contrast, ended that season 19th in English football's third tier.

Legg's own experience of Uefa competitions did not end with Swansea City's ignominious exit in 1991.

In the twilight of his career, Legg played for and managed Llanelli in Europe and led the side to notable victories over Motherwell and Dinamo Tbilisi.

While Wales have been represented by Airbus UK, Bala Town and Prestatyn Town in this season's Europa League, Swansea will be representing England as the Capital One Cup Winners.

Clubs in the English football system were barred from representing Wales in Europe in 1995, a decision which Legg thinks has been to the detriment of Welsh football.

"I'm disappointed the [English-affiliated] Welsh clubs haven't been involved in Europe, they certainly need them in there," added Legg, who also appeared for Notts County in an Anglo-Italian Cup final win over Ascoli in 1994.

"Obviously winning the Welsh Cup was a passage through and obviously the professional clubs were no longer taking part.

"I think it was a big, big disappointment for everybody.

"As a player and as a manager of a non-league club as well, to draw a Swansea or a Cardiff is probably better than winning the cup."

Malmo, a club who reached the European Cup in 1979, are Swansea's opponents on their return to European competition.

Legg says Michael Laudrup's men will be favourites to overcome a side who thrashed Hibernian 9-0 on aggregate in the previous round.

He also believes Swansea can reach the group stages and cope with demands of the competition.

"You'd like to think they'll at least get to the group stages," said Legg, who would later play for Swansea's Welsh rivals Cardiff City.

"That would be expected, I should imagine, from the fans and the players themselves.

"It can be a disruption but I'm sure Michael Laudrup will have a big enough squad and he will know what he'll do.

"He'll rotate and make sure the players don't get burnt out. They've got to be lucky with injuries.

"But I don't think it will bother them. It's a new adventure and they'll look forward to it."