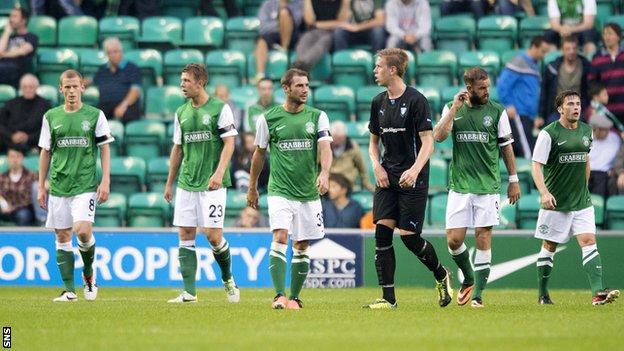 A humiliating 7-0 reverse at Easter Road resulted in a 9-0 aggregate loss, the worst result ever for a Scottish team in Europe.

In the wake of that 5-1 hammering at Hampden, the Irishman pledged to overhaul the staff and culture at the club.

The changes in personnel duly followed but last season delivered another bottom-six finish in the league and another one-sided Scottish Cup final defeat, although both were in less harrowing circumstances.

Supporters will therefore be less inclined to be in a forgiving mood this time.

The recent shelf life for Hibs managers does not extend beyond two years, with previous incumbents Colin Calderwood, John Hughes, Mixu Paatelainen and John Collins lasting between 12 and 18 months.

The fact that this pattern has done little to improve matters on the pitch may work in Fenlon's favour but he would certainly appear to have used up two of his three strikes.

And he has already pulled off something of a great escape in April, with Hibs completing a remarkable Scottish Cup semi-final win against Falkirk, having trailed 3-0 at half-time to the First Division side.

That thrilling victory came at just the right time for the manager after a run of just one win in the preceding 12 league matches.

Fenlon's task this term has been complicated by the loss of Leigh Griffiths, who was so influential last season - scoring 28 goals.

A token effort was made to sign the striker permanently from Wolves but that was more of an exercise in appeasing frustrated fans.

Having missed out on Falkirk's Lyle Taylor, James Collins may provide the answer up front, with Swindon accepting an offer for the 22-year-old.

The number nine shirt worn by Griffiths has gone to Rowan Vine and, on the albeit flimsy evidence of two matches against Malmo, it hardly seems like a fair swap.

The former St Johnstone forward will surely improve as he regains match-sharpness and he was by no means the worst performer against the Swedes. 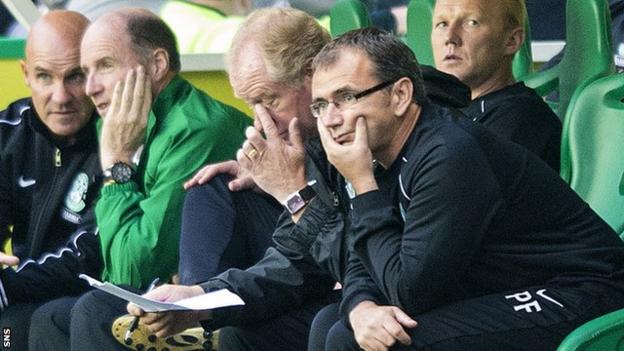 A packed Easter Road paid an emotional tribute to recently deceased club legend Lawrie Reilly prior to kick-off but the dismal performance that followed was quite simply an affront to the memory of the great striker.

Hibs were inept in every department but what was most alarming was the lack of heart shown.

Fans can understand the gulf in fitness against a team midway through their campaign and grudgingly excuse inadequacies in technique in comparison with a slick Malmo side challenging for the Allsvenskan title.

However, the meek nature of the capitulation will be hard to stomach. Hibs politely stood off their opponents, while the motionless theme continued whenever the home side had possession.

The players must shoulder the blame for their attitude and application but Fenlon's puzzling selections and tactics contributed to the sorry collapse.

Liam Craig, so successful in a central attacking midfield role for St Johnstone, was stuck out on the left, while the defensively-minded pairing of Kevin Thomson and Tom Taiwo were overwhelmed in the middle of the park - a huge gap between them and isolated forwards Vine and Danny Handling.

The left-sided Lewis Stevenson was given a torrid time at right-back in the first leg yet started the game in the same position.

With little protection from teenage winger Alex Harris or Taiwo and Thomson - who are both strongly left-sided, Stevenson was repeatedly targeted until the first goal came from a move down Hibs' right flank.

Before that opening strike on 21 minutes, Hibs' game plan had been to aim diagonal balls in the direction of Harris, who was quickly cowed into submission.

There was to be no change in strategy as the home side failed to exert any pressure on the Malmo defence.

Around half of the 16,000 crowd had slinked off before the full-time whistle and will not be of a mind to return to Easter Road any time soon after such a chastening experience.

Whether or not Fenlon will still be in charge when they do consider making a reappearance will obviously depend on how Hibs begin the new league campaign.

And the former Shelbourne and Bohemians boss will know he must get off to a good start since chairman Rod Petrie has developed a habit of wielding the axe before the club's annual general meeting, scheduled for October.