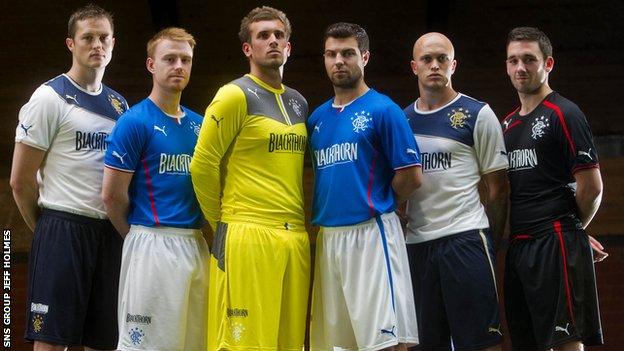 By assembling a Rolls Royce squad to win a Mini Metro league, Rangers are again raising eyebrows with their summer signing policy.

It is not only football pundits and supporters, whether friend or foe, but experts in football finances and even player agents who are mystified by the high spending from an outfit that suffered liquidation just over a year ago.

Having strolled to the Division Three title, give or take some minor embarrassments dealt by their part-time opponents, the highly-paid Ibrox squad are expected to again overpower the nine sides who stand in the way of a second successive promotion.

Manager Ally McCoist is taking no chances, with just one of a host of summer signings likely to be earning more per week than any of their rivals in the newly branded League One will be paying their whole squad.

After starting their new era in the bottom tier of Scottish football, a similar disparity in resources led to Rangers securing the fourth-tier title last season with 24 points to spare from Peterhead.

So, although they are not paying the kind of salaries that led to the likes of Brian Laudrup join them in Scotland's top flight, why are Rangers insisting on issuing pay cheques that even dwarf every club in the new Premiership bar Old Firm rivals Celtic? Especially relevant at a time when financial experts predict that the Ibrox club are losing about £1m per month.

As one agent pointed out: "Gary Bollan led Livingston to successive Third Division and Second Division titles on a budget of £350,000 per year."

That is less than the £7,000 per week that Rangers are believed to be paying captain and former Scotland player Lee McCulloch.

has more than doubled his wages - Dundee United are thought to have been paying him £2,000 per week - to switch from captaining a side who finished in the top six of the Scottish Premier League to striking fear into League One defences.

Agents believe it would have taken much less than the £5,000 per week he is thought to be receiving to entice the 30-year-old Irishman down from Tannadice.

Even those gleefully pointing their clients towards the signature line view it as "a sledgehammer to crack a nut".

"When I asked why they didn't keep their powder dry, keep some of their resources in-house until they return to the top division, I was told that, when you have 40,000 paying customers, you have to give them something fresh to retain their interest," said one agent.

The Rangers manager had hoped that adding such quality and experience to his squad of youthful potential would hand the fans who continued to pack Ibrox some cup success to compensate for the lack of real league competition.

That failed to materialise - and they also failed to win any of their first four away matches in Division Three as they adapted to visiting tiny, sometimes ramshackle grounds. Backed to go through the league season unbeaten, they were left red-faced by Stirling Albion, Annan Athletic and Peterhead, the latter two in front of their own fans.

That, suggests another agent who thinks McCoist has adopted the right signing policy this time round, is just one of the lessons Rangers have learned from last season.

"It was a culture shock for them last season and for their players it was an attitude problem," he said.

Derek Ferguson, who himself finished his playing career in Scotland's lower leagues, has been taken aback by the number of new signings.

However, the former Ibrox midfielder said: "Last year was a learning curve for everyone at Rangers, not just Ally and his assistant, Kenny McDowall, but the fans too.

"They were surprised by the quality of the players in the Third Division. They have learned from that.

"It takes a certain type of player who can perform in front of 40-50,000 every week and deliver.

"It's not just about being a good player. It's about handling everything that goes with being an Old Firm player in Scotland."

McCoist has been undeterred by last season's patchy dip into the overseas market, but and do appear to be a class above as they await the end of Rangers' signing embargo along with six players with SPL experience.

"I'm surprised they have brought in so many," added Ferguson. "They could also have got more value for money looking at First Division players capable of winning the league this year.

"And I have seen a number of the younger players at Ibrox in action and I certainly think they have the ability to get them out of that division.

"But Ally and Kenny will have done their homework, not only into their ability as players but their characters too."

Ferguson thinks McCoist's remit will have simply been to name his targets and leave the wages to "the money men".

Those money men in December raised £22m through their initial public offering on the Stock Exchange and Neil Patey, footballing specialist at accounting firm Ernst & Young, thinks Rangers must adopt a "prudent cost control" to ensure that the funds are not squandered.

"Unusually, they are using the money from the IPO to fund their losses until such time as they return to the top flight and are able to tap into that prize money and money from a return to European football.

"If you don't keep a prudent cost control, you could spend the £22m and run out of money before getting to the top division."