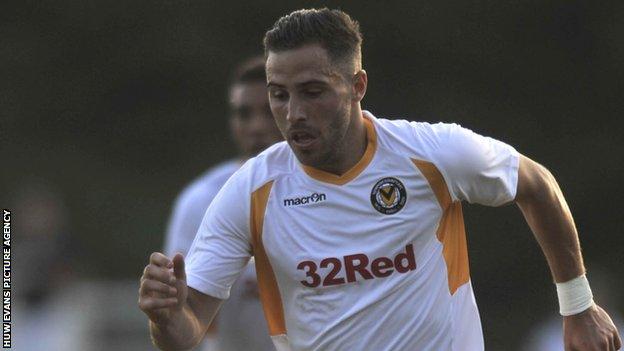 Newport County's Robbie Willmott will miss the start of the League Two season because of a shoulder injury.

The midfielder, 23, sustained the injury in the friendly with Reading.

He is expected to be out for between two and four weeks, meaning he will miss County's opening game against Accrington Stanley.

"I'm disappointed for him but I've seen him and he seems to think it has settled down quite dramatically over the last 24 hours.

"He seems a little more buoyant.

"He sees the specialist on Monday morning, who will give his opinion and hopefully we won't lose him for too long."

Edinburgh is optimistic striker Aaron O'Connor will be back from injury a lot sooner than expected.

O'Connor has been troubled with a groin injury which could require surgery.

"We're waiting for the specialist's report and there may be good news that it may not be long as we thought," Edinburgh added.

"He certainly needs no operation on his stomach and his groin's had a sight problem.

"But we're hopeful with a little bit of strengthening and some work he may not eventually need the operation.

"It looks a lot brighter than it did at the beginning of the week."

Edinburgh says full-back Ryan Jackson is on the verge of joining the League Two newcomers.

The former Wimbledon player was released by Macclesfield earlier in the summer and has been on trial with the Exiles.

But because Jackson is under the age of 24, Edinburgh says Newport need to check they won't have to pay compensation.

County host Aston Villa on Sunday in their final pre-season friendly before their open their League Two campaign against Accrington next Saturday.