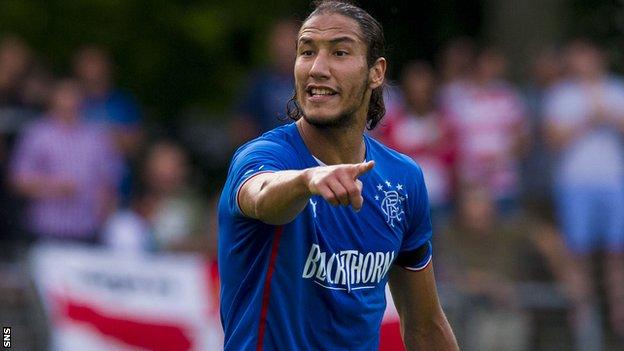 The 26-year-old played in the lower reaches of the French leagues before his move to the Shrimpers in 2010.

He is the eighth summer addition to the Ibrox squad and will be registered on 1 September when the club's signing embargo is lifted.

Mohsni told Rangers' website: "I think it is a chance to prove that I can play in the top league."

The French-Tunisian's contract will come to and end as Rangers hope to return to Scotland's top flight and he is already eyeing an extended stay.

"It would be amazing to be one of the players who help Rangers back to where Rangers belongs," he said.

I was at Southend before and the facilities were okay, but when you compare it to Rangers, you see that here there is everything

But he gained a reputation for controversy, refusing to train under then manager Paul Sturrock following a spell on loan with Ipswich Town last season as he wanted a move to a club higher than League Two.

Mohsni had his contract terminated by mutual consent in the summer and impressed on trial at Ibrox.

"I was at Southend before and the facilities were okay, but when you compare it to Rangers, you see that here there is everything," he said.

"The training ground, the stadium, these are some of the reasons you want to come to a club like this."

Since Mohsni was last registered with a club outside Scotland, he cannot play as a trialist before September.

Manager Ally McCoist will be able to field summer signings Jon Daly, Nicky Clark, Nicky Law and Cammy Bell in some competitions, with Rangers kicking off their campaign against Albion Rovers in the .

McCoist is still keen to sign on top of another goalkeeper and striker.

On Mohsni and Pandza, McCoist said: "I would be thrilled if we could get both of those boys."