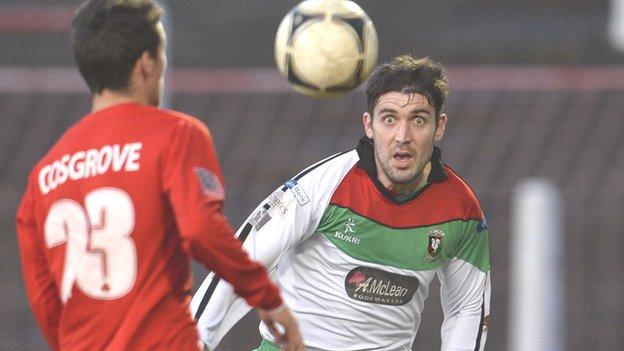 Carson, who played for the Bannsiders between 2004 and 2011, has signed a one-year deal with the club.

"Stephen is delighted to have agreed to come back to Coleraine, to come home as he put it," Coleraine manager Oran Kearney told the club's website.

"I never wanted him to leave in the first place....negotiations were relatively straightforward."

Kearney added:""It took a while because Stephen had a lot of offers, including some life-changing ones from beyond Northern Ireland.

"He had to take everything into account when making his decision but now that he has I'm over the moon that he has decided to commit to Coleraine for the next year.

"He's always been one of the top players in the league for assists and can turn a game with a moment of magic.

"On top of his qualities on the pitch, he will bring a lot to the squad off it and will be a great influence for our two young wingers Joel Bradley and Craig Moore."

Carson had also been linked with a move to Linfield.

He has also played for Rangers, Dundee United, Barnsley and Hartlepool United.

Carson won a Northern Ireland cap in the friendly defeat by Italy in 2009.