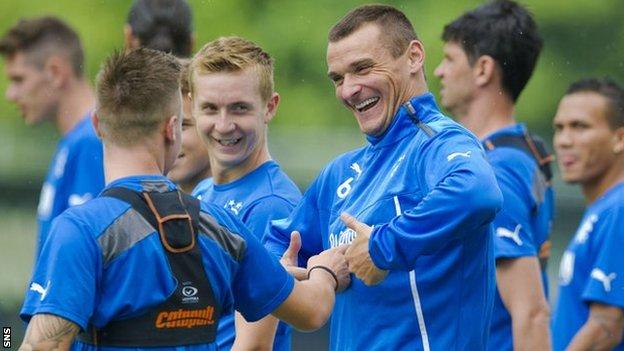 The Ramsdens Cup has become Scotland's traditional low key start to the season, but Rangers' participation has thrust it more into the spotlight.

Rangers will launch a second campaign in the at Livingston's Energy Assets Arena against Albion Rovers.

And they will be hoping to improve on last season, when they lost to eventual Cup winners Queen of the South.

Rangers' visit to Livingston on Sunday is being show live on BBC Alba.

But five of the Third Division champions' seven summer signings will not be performing for the TV cameras - because of the combined effects of a signing embargo and rules over the fielding of trialists.

Meanwhile, Ramsdens Cup rules dictate that all sides can only field two trialists in the first round - and those have to have previously been registered with Scottish clubs.

So defenders Stevie Smith and Ricky Foster, plus midfielder Arnold Peralta, are definitely ruled out for Rangers until September.

In addition, only two of goalkeeper Cammy Bell, striker Jon Daly and midfielder Nicky Law will be able to face Rovers.

McCoist said he would have to be careful not to fall foul of the complicated rules under the new Scottish Professional Football League umbrella.

"It's extremely difficult for us," said the Rangers boss. "We can play two trialists in the Ramsdens Cup as long as their international clearance is in Scotland.

"If we're lucky enough to qualify for the next round, however, we then can't play any trialists in the second round.

"In the League Cup, we can't play any at all, while in the league we can play two trialists per game a maximum of three times per player.

"It's far from ideal and I don't want to make any mistakes on it, so I'll be careful about it!"

Rangers' visit will ensure a big crowd in Livingston, the game having been switched from Rovers' tiny Cliftonhill Stadium, as James Ward makes his debut as manager in the senior game after previously being assistant to the departed Todd Lumsden.

"The squad of players here have worked really hard in pre-season and they are all bursting to be involved in a high-profile game like this," he said.

All the other 15 first-round ties take place on Saturday, with 15:00 BST kick-offs.

However, what many may not realise is that the Ramsdens Cup has already started, a preliminary round having taken place after teams from the East of Scotland and South of Scotland leagues were allowed into the competition for the first time.

Edinburgh outfit Spartans but face a difficult return to Dumfries to take on the holders and Second Division champions, with Jim McIntyre making his competitive debut as Queens manager.

One representative from the Highland League is also making their Ramsdens Cup debut - Formartine United in an intriguing test of strength at home to East Stirlingshire, who regularly finish bottom in Division Three and are regarded as the club most in danger once a new pyramid system into the senior league comes into play.

Formartine manager Steve Paterson is short of bodies because of injuries and holidays and said: "It is a great honour to be involved, but we are not in the best of shape but will look to be the first Highland League team to win a Ramsdens Cup tie.''

Dundee, relegated from the Scottish Premier League last season, face a difficult trip south to face Alloa Athletic, who will be their opponents in the new, second-tier Championship after the Wasps' promotion.

Dunfermline Athletic, relegated after their play-off final defeat by Alloa and have been handed a derby away to Cowdenbeath, who unusually find themselves a league above their Fife rivals.

Meanwhile, a Lanarkshire derby at Excelsior Stadium will witness the home side of Airdrieonians after 11 years as Airdrie United when they host Hamilton Academical.

Queen of the South v Spartans