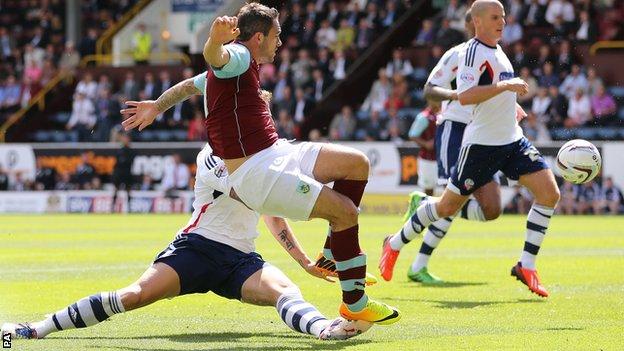 Darren Pratley earned Bolton a point as they came from behind against local rivals Burnley in the opening game of the 2013-14 Championship season.

Bolton defender David Wheater handed the Clarets the lead at Turf Moor when Danny Ings's shot deflected in off him.

Pratley finished off a good move by the visitors with a powerful strike to bring the sides level before half-time.

New Bolton signing Jermaine Beckford had a late chance for a winner but could not turn home from close range.

Burnley came into this game fresh from the departure of last season's top scorer Charlie Austin to QPR on Thursday, but Ings is a man confident he can step up to fill the void and he created the opener after a bright start from Sean Dyche's men.

Ings beat Wheater for pace as he burst into the area after collecting Sam Vokes's ball but just as he struck, the Bolton defender made a desperate lunge for the ball.

However, he could only deflect past his own goalkeeper Adam Bogdan and it trickled into the net in the 26th minute.

Bolton, who lost this fixture on the opening day of last season, were not behind for long as Pratley finished off a superb move from the visitors 11 minutes later as he cleverly held his run to create space for Chris Eagles to drag the ball back into his path before firing home.

Burnley's slick passing play allowed them to dominate for large periods of the second half but they could not penetrate the visitors' defence and the best chances to win the game fell to the Trotters.

However, former Leicester striker Beckford could not turn home from close range after a scramble in the area before substitute Craig Davies tested Tom Heaton with a long-range effort that the Burnley goalkeeper keeper palmed wide on his debut.

"I was pleased with our performance, I thought it was a continuation of our good form in pre-season.

"There was good energy to it, a nice solid look to it but also some real quality at times.

"We nearly scored again and that can happen at times. We're playing against a big club in terms of financial sense in this division and they will be well-fancied."

"I thought it was a good game. We did well to come back from a little setback which is going to happen so that was pleasing from a coach's point of view.

"I thought it was a fair result. We didn't really do enough to win it but that's how it goes.

"It was a local derby and you need to show grit and determination. I think we lost the opening game last season but that was never going to happen with this new group."