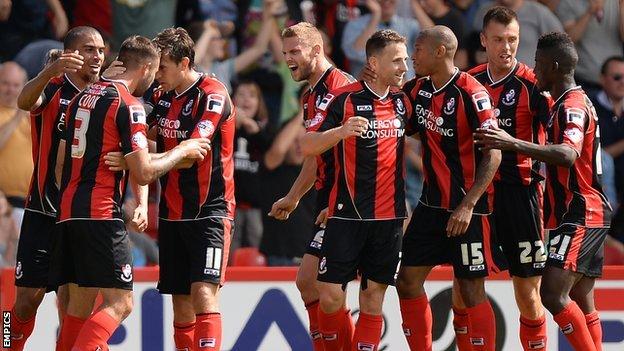 The hosts, playing their first game in the second tier of English football in 23 years, took the lead when Grabban headed in from Harry Arter's cross.

However, Grabban spun a marker and shot in from 25 yards to make it 2-1 before Charlton ended with 10 men following Bradley Pritchard's dismissal.

Rare away woe for Charlton

Charlton's defeat at Bournemouth was the first time the Addicks had lost in eight away games.

Their last defeat on the road was on 16 February, when they lost 1-0 at Hull.

Bournemouth manager Eddie Howe had expressed his fears that his side could struggle at the higher level after they finished runners-up in League One last season to win promotion to the Championship.

But the Cherries took a deserved lead in the 26th minute through Grabban's header, before Arter, Grabban and Wes Thomas missed opportunities to double the hosts' advantage.

Those misses looked to be costly as Charlton equalised four minutes after half-time, thanks to Kermorgant's scissor kick.

However, Grabban, who failed to score in his final 14 appearances of last season, netted his second goal of the day to put Howe's side back in front 17 minutes later.

Charlton's hopes of claiming a point were not helped by the late sending off of Pritchard, shown a straight red card for a lunge on substitute Ryan Fraser.

The Addicks ended the 2012-13 campaign on an eight-match unbeaten run but could not find an equaliser as Bournemouth held on for the win.

"Lewis maybe didn't grab the headlines last year but he was a key part of the team.

"He has always performed well even when he perhaps didn't score the goals.

"I am happy with Brett [Pitman], Lewis and Wes [Thomas] but really that is all we have for recognised strikers and that is not enough.

"We are looking but won't be rushed and panic while these boys are fit. They deserve their chance and they will get it."

"I have not seen the decision again, but from first reactions it looks like Bradley Pritchard's challenge was a dangerous tackle so there are no complaints. Sadly he'll have to serve the ban.

"It was a superb equalising goal from Yann but we were beaten by a magic strike on the day and are disappointed to lose.

"Yann is a key player for us, he's a top centre forward and it's a marvellous way for him to start the season."