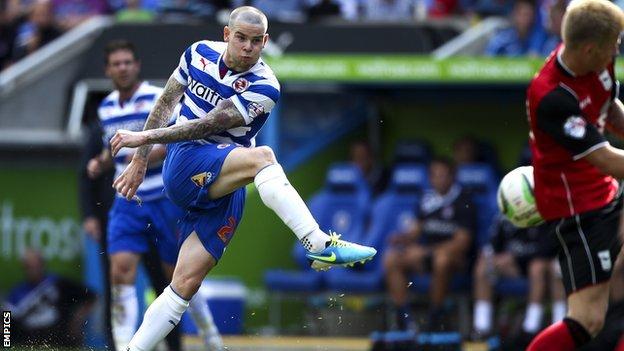 Jay Tabb scored against his old club to give the visitors the lead when he netted a rebound after goalkeeper Alex McCarthy had blocked his first shot.

But the hosts equalised as Adam Le Fondre bundled the ball into the net from Garath McCleary's cross.

Ipswich Town are playing in the Championship for the 12th successive season and have been in the second tier of English football longer than any other club.

Tabb played more than 100 games for the Royals before joining Ipswich in the summer and put the visitors ahead after 14 minutes.

A deep cross from Carlos Edwards was met by Tabb's far-post volley with the midfielder sliding home the loose ball after McCarthy had parried his first effort.

Ipswich, who had lost their last four matches against Reading, conceded an equaliser a minute before half-time with Le Fondre scoring from close range as the away side failed to deal with a ball into the penalty area.

Town striker David McGoldrick had a chance to put the visitors back in front, but narrowly missed connecting with Daryl Murphy's low cross.

That miss proved costly as Guthrie won it with a powerful winner to give Reading the perfect start as they look to make an immediate return to the Premier League.

"We have got three points from a challenging fixture and I am delighted we got off to a winning star, but we had to show a lot of resolve at the end.

"Our previous captain Jobi McAnuff was on the bench as an impact player today so Sean Morrison got the armband.

"We won, so he will stay in the side and keep the captain's job, but Jobi has done magnificently for me and will continue to do so."

"If we play like that for the rest of the season I will be pleased and we will be fine.

"We looked comfortable and lost out to an outstanding strike, but this is a tough place to come to.

"I was pleased with our performance and it was no surprise that Jay Tabb should grab a goal on his return to Reading. Things like that do seem to happen.

"I am not unhappy with that as an opening game because it was a difficult one to start with."