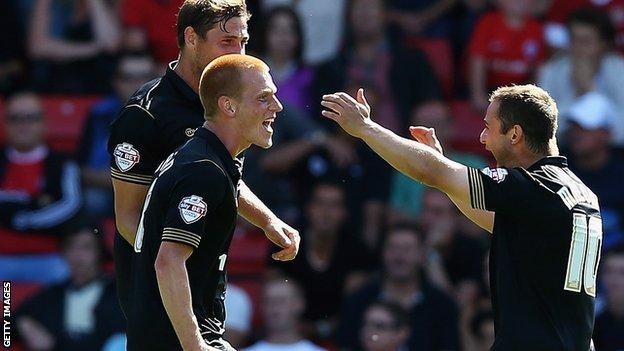 Wigan Athletic began life in the Championship with an easy win as they beat 10-man Barnsley in Owen Coyle's first competitive game as Latics boss.

Midfielder Ben Watson, who grabbed the winner in their 1-0 FA Cup final win against Manchester City in May, opened the scoring with a low 25-yard effort.

Grant Holt diverted in Emmerson Boyce's shot for 2-0, before Barnsley's Dale Jennings was dismissed for a bad foul.

It was a perfect start for Coyle, who took over in the summer after former manager Roberto Martinez left to join Premier League Everton.

Only excellent goalkeeping from Barnsley captain Luke Steele kept the score down and the Tykes failed to test Scott Carson, who was making his debut in the Wigan goal.

Fellow debutant Holt, a £2m summer signing from Norwich, opened his competitive account for the Latics in fortuitous fashion, deflecting in Boyce's effort after Watson had put the visitors ahead.

The match was over as a contest when substitute Jennings, who moved to Barnsley from Bayern Munich in the close-season, was sent off for a studs-up challenge on Maloney after only being on the pitch for five minutes.

No joy for Barnsley

This result continues Barnsley's poor record against Wigan and the Tykes have never beaten Wigan in a league match.

Barnett, another new addition to Coyle's squad, steered in from a corner, before Maloney, who had been twice denied by Steele, got the goal he deserved with a two-yard tap-in late on.

"For me, there wasn't much in it in the first half. They scored in our best spell.

"After Dale got sent off I was hurting for the players because I don't think they deserved it.

"You give the referee an easy decision. I've got to see it again, I don't think it was really reckless.

"We've come up against an excellent team. We've lost three points but there's another 135 to go.

"It's a new season. A new start. Our challenge is the Championship and we deserve to be in it."

"From start to finish it was a fantastic performance from a dynamic team against a Barnsley side who, towards the end of last season, showed real resilience in taking on all before them to stay in the Championship.

"But we stood toe-to-toe with them, showed real quality and to be honest could have scored more than four goals, so as manager I couldn't have asked for much more than what the players gave today.

"At half-time there was still much to do, and even when Grant Holt scored the second goal we couldn't drop our standards. The Championship can punish you very quickly but our quality shone through and on another day we could have scored six or seven goals."