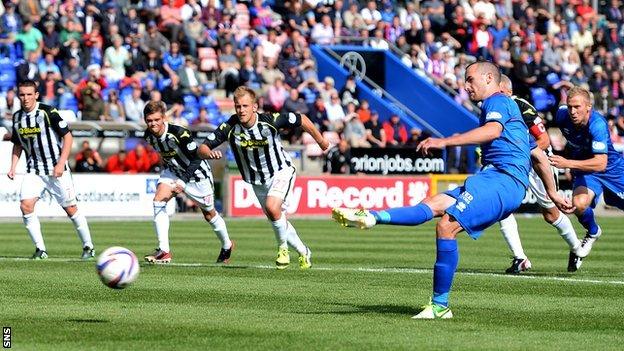 Inverness opened their Scottish Premiership campaign with a home win against St Mirren.

St Mirren captain Jim Goodwin came closest to opening the scoring in the first half, his powerful free-kick striking the outside of the post.

A David van Zanten handball gave the hosts a penalty and James Vincent was successful from 12 yards.

Close range efforts by Aaron Doran and Billy McKay stretched the Inverness lead before van Zanten was sent off.

After finishing fourth in last season's top flight and narrowly missing out on European qualification, Terry Butcher's Inverness welcomed a St Mirren side who had ended the previous campaign second bottom, albeit with the Scottish League Cup sitting in the trophy cabinet.

And it was the Buddies who were prominent in the early stages, with summer signing Gary Harkins keen to make an impression.

Graeme Shinnie could not convert with a decent chance for Inverness and Aaron Doran should have found the net after being played in by Vincent.

Brill continued to be the busier of the two keepers, with Steven Thompson also denied by Caley Thistle's summer signing.

Goodwin sought to break the deadlock following a foul around 25 yards out but the midfielder was left disappointed as his strike hit the post on its way out.

The second half was still young when referee Kevin Clancy pointed to the spot, with St Mirren's David van Zanten adjudged to have used his arm to block Vincent's shot.

Debutant Vincent confidently converted and the Highlanders were soon two ahead.

Doran rolled the ball into the net after being presented with the ball by new St Mirren goalkeeper David Cornell's poor clearance.

St Mirren's day went from bad to worse when McKay headed home a David Raven cross and there was still more misery to come for the visitors.

Van Zanten had been booked in the wake of the penalty award and a foul on Nick Ross resulted in a second caution and an early end to the match for the defender.