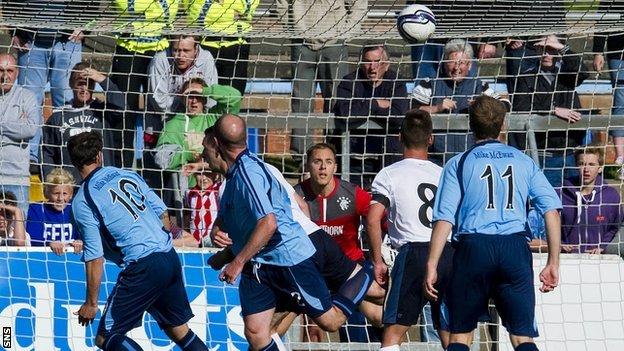 Forfar Atheltic's Gavin Swankie struck an extra-time winner to send Rangers out of the Scottish League Cup in the first round.

Striker Swankie took advantage of a Lee McCulloch defensive slip to fire Forfar ahead early on.

The lead lasted until the closing stages of regulation time when Fraser Aird headed home a leveller to force an additional 30 minutes.

But Swankie headed his second in the 115th minute to send Forfar through.

Rangers manager Ally McCoist was unable to select any of his summer signings, who cannot be registered until the club's transfer embargo ends on 31 August.

However, Scotland internationals Lee McCulloch and Lee Wallace featured in a line-up reminiscent of last season.

And McCulloch was culpable at Forfar's opener as Swankie latched on to a long ball to lob Scott Gallacher.

A header by Chris Templeman flashed by the post as the hosts continued to press.

McCulloch tried to level matters with a low, hard free-kick but the defensive wall did its job to avert any danger.

But Rangers did level when Aird nodded into the net after Little's initial header had come back off the crossbar.