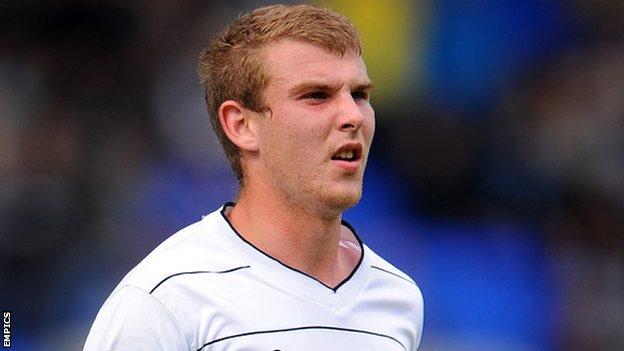 The Stags began well and Lee Stevenson shot wide, but the hosts settled after an indifferent 30 minutes and Matt Sparrow's half-volley put them ahead.

Debutant Sam Winnall beat Alan Marriott to a through-ball to make it 2-0.

The Iron eased home after the break, although Stags substitute Louis Briscoe missed a late penalty, which saw Eddie Nolan sent off for a second caution.

Nolan's dismissal for handball was the only bad note for the home side, who deserved their victory despite their nervy start.

Mansfield, who returned to the fourth tier of English football as Conference champions after a five-year absence, were the better side for the majority of the first half and could have gone ahead inside two minutes.

A long Lee Beevers throw in was cleverly laid into the path of Stevenson, but the striker shot wastefully wide.

Sam Clucas then missed the target as the visitors continued to dominate and the summer signing from Hereford also saw a fine 20-yard effort go just over the bar.

But it was the Iron who went ahead when Sparrow showed superb control and composure to fire the ball past Marriott.

Winnall soon doubled the lead after racing onto a long pass and Andy Welsh could have made it 3-0, but his shot scraped the outside of the post.

At the other end, Dyer guided a header wide when he should have scored but Briscoe missed the best chance when he blazed over the bar from the spot in the 89th minute.

"Playing against a Mansfield team who have just been promoted and you know they are on a high, these games are not easy by any stretch of the imagination. In fact I said it was probably going to be one of our toughest games of the season because of those elements.

"The first 15 minutes we were backs against the wall, they threw everything at us in the box so great credit to the defence for keeping solid in that period.

"To get the first goal was brilliant but Sam Winnall's just really calmed things down and you could see we were well in control after that. There was a few other scares but other than that I thought we controlled the game."