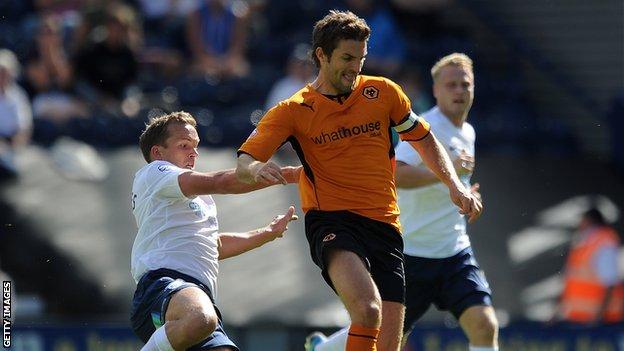 Title favourites Wolves began life in League One with a goalless draw at promotion hopefuls Preston.

Kevin Davies came close to a goal on his Preston debut, but his second-half effort from 15 yards drifted wide.

The home side threatened from a number of set-pieces but failed to beat keeper Carl Ikeme.

For the two teams, who were involved in a fairly even contest at Deepdale, a point will be viewed as a satisfactory start to a campaign in which both are expected to challenge for a return to the Championship.

Preston and Wolves were two of the 12 founding members of the Football League. As the league celebrates its 125th anniversary, both clubs find themselves in the third tier. The last time that happened was in 1988-89.

After back-to-back relegations, Wolves were playing a game in the third tier for the first time since May 1989.

Around 5,000 Wanderers fans travelled to Lancashire to watch the first match of Kenny Jackett's reign as head coach, and saw their side weather an early North End storm.

One-time England international Davies, one of three debutants in the Preston line-up, was almost on target inside two minutes, as winger Lee Holmes tricked his way past Danny Batth and stood up a cross that was just too high for the veteran forward.

After escaping from a series of corners unscathed, the visitors grew into the game and Sako, a summer target for Premier League side Fulham, struck a powerful angled drive that forced Rudd into a smart save low to his left.

But the England Under-21 goalkeeper had John Welsh to thank for preserving his clean sheet shortly before the break, the Preston skipper clearing a well-struck volley from Leigh Griffiths off the line as a feisty first half drew to a close.

I think we can do better, particularly in the second half, because I don't think we had a shot on target and that was disappointing.

Scotland international striker Griffiths was making his first start for Wolves, two-and-a-half years after moving to Molineux. He netted 28 times in a loan spell at Hibernian last season, 23 of them coming in the Scottish Premier League, and he showed brief glimpses of his potential to score goals south of the border when given the right service.

The second half began in the same fashion as the first, with Davies almost putting the hosts in front. The ex-Bolton man latched onto Tom Clarke's through-ball and collided heavily with Wolves keeper Ikeme but he poked the ball wide from 15 yards.

A teasing cross from Preston substitute Will Hayhurst was almost turned in at the back post by Davies, while Hayhurst and Holmes had claims for penalties waved away by referee Andy Haines.

Despite the odd frenetic moment in the closing stages, the two teams appeared to run out of ideas as they attempted to break the deadlock and accepted a point apiece.

"It was a good opening-day fixture for us. There was a lot of endeavour and a good attitude from both sets of players.

"The first thing you want to do in the first game of the season is not get beat, although obviously you'll try to win the game, hence why I went to 4-4-2 for the last five minutes.

"We can be really pleased with how we performed."

"It's no surprise to me that we've been tagged that way.

"In terms of a changing team, it showed today that until you get into your level of play, you never quite know what you've got. That assessment has to come quickly.

"I think we can do better, particularly in the second half, because I don't think we had a shot on target and that was disappointing.

"The fans were a massive boost. They got right behind us and cheered us right to the end. It's a new start for us and it's a point that we start with."