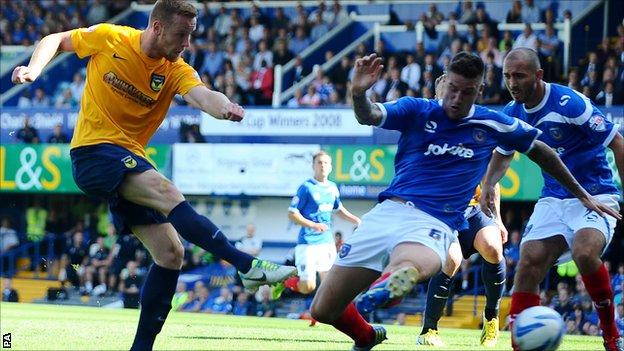 Oxford United came from behind to seal victory against Portsmouth in front of a League Two record attendance.

Deane Smalley levelled after his neat turn and shot before Alfie Potter put the U's in front from six yards.

Pompey's Johnny Ertl was sent off for an elbow on Danny Rose before Potter increased the lead, beating John Sullivan at his near post, while Smalley sealed the rout.

"Of course it's frustrating because you lose the game 4-1 from a position where you were dominating the game the first 35 minutes.

On Johnny Ertl's red card: "I've seen it on video, it's Johnny jumping up with an arm up to protect him, he's not swinging it. The referee's made a decision because his arm's up there that it's a sending off so that's it.

"I think the team played well, we just didn't do well enough professionally when defending."

"We scored at the right time.

"Fair play to Portsmouth and all they've been through. Guy has had to work extremely hard over the summer to get a team out there and there was an unbelievable occasion to be involved in.

"I'm delighted for my players and for the support we had today.

"The sending off made it easier for us but I felt we shaded a decent game today.

"We do things the right way and it is game one of 46 and we have had a fantastic start."