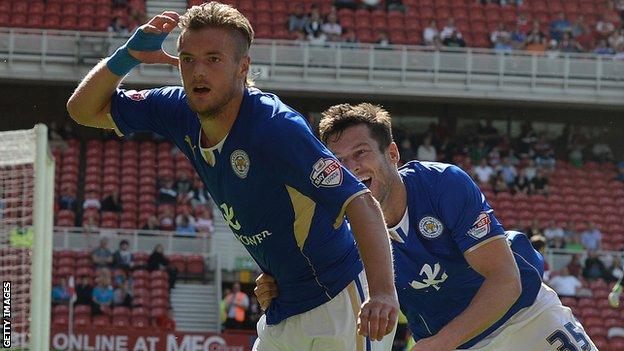 Second-half goals from Danny Drinkwater and Jamie Vardy saw Leicester come from behind to beat Middlesbrough in their Championship opener.

Lukas Jutkiewicz gave the hosts a 35th-minute lead as the ball went into the net following a challenge between him and ex-Boro defender Sean St Ledger.

Jutkiewicz's opener was the least they deserved although there is some argument about whether he or St Ledger got the final touch to Mustapha Carayol's cross.

Striker Jutkiewicz and winger Carayol then saw shots saved by Kasper Schmeichel, with Grant Leadbitter also denied by the busy Leicester goalkeeper late in the half.

It was a different story after the break as the Foxes started to take control of the match.

And after a strong spell of pressure Leicester levelled on the hour with Drinkwater shooting powerfully into the net.

The match had completely turned around seven minutes later as David Nugent peeled to the left and slotted a neat ball forward for Vardy to race clear of Williams and get into the box before lifting it past the advancing Jason Steele.

Leicester could have secured a more emphatic win before the end with Nugent and Vardy denied by Steele late on.

"We played really well in the first half. We had a good shape, passed the ball around well, created chances and made good decisions in key areas.

"But Leicester are a good side. They came back at us in the second half; we stopped doing the basics well and let them back into the game.

"The bottom line is you have to take your chances. We said it so many times last season that you have to close out games when you are are on top."

"In the first half we didn't work hard enough, we didn't make enough positive decisions and we let Middlesbrough shape the game.

"We were well worth the win, although it looked a bit precarious at half-time."