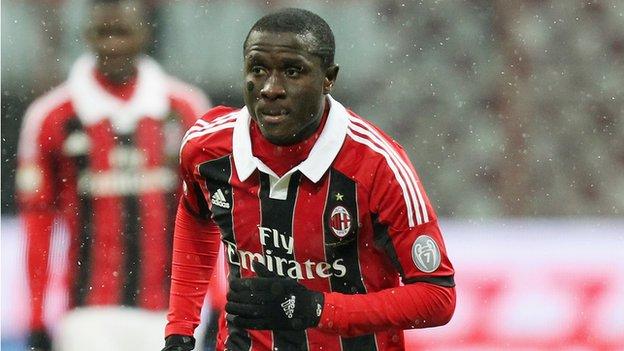 Sierra Leone midfielder Rodney Strasser is delighted with his move to Genoa from Italian rivals AC Milan after passing his medical on Friday.

As part of the deal Milan took the other half of the registration of Guinea's Kevin Constant.

Strasser spent signs a five-year deal after struggling to establish himself at Milan.

"My desire is to play regularly and I'm excited at the chance of getting that at Genoa," Strasser told BBC Sport.

Hopefully I can add positively to what is already a good footballing team.

The 23-year-old made just six Serie A appearances for Milan and went on to Lecce and Parma during his five-year spell.

"I've learned a lot at AC Milan and will take those lessons with me.

"I will definitely miss friends, officials and team-mates who have stood by me all these years.

"I look forward to meeting my new team-mates, settle down and give my best to this great club.

"Hopefully I can add positively to what is already a good footballing team.

"It's a big opportunity for me to prove myself and I must thank both clubs for sorting everything out as soon as possible."

The former Kallon FC player was enrolled with the AC Milan youth team in 2007 and later graduated to the senior team.

Meanwhile, Guinea's Constant will remain at San Siro after AC Milan took the remaining half of his registration from Genoa as part of the Strasser deal.

According to a statement on Genoa's website: "Genoa can also confirm the permanent transfer of Kevin Constant's playing rights to the Rossoneri club."

He walked off the pitch during a pre-season friendly with Sassuolo last week after allegedly suffering racist abuse.