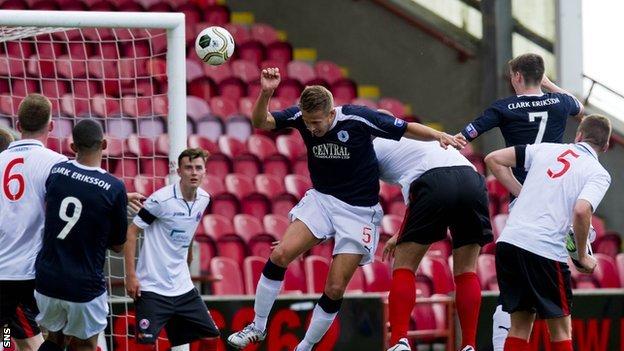 Falkirk progressed through to the second round of the Ramsdens Cup following their win at Broadwood.

The visitors almost got off to the perfect start inside four minutes when Blair Alston worked a good angle for the shot but could only blaze his effort over the bar.

The hosts responded through efforts from Luke Leahy and Patrick Scullion, both of which were well saved by Bairns stopper Michael McGovern.

John Sweeney was next to go close but again McGovern was well placed to make the save in an impressive first-half display.

It was the Gary Holt's men who broke the deadlock after the restart when Alston poked home from close range following some good work by Jay Fulton.

Stefan McCluskey levelled things up on the hour mark but Conor McGrandles restored the Bairns' lead immediately with a neat header from Leahy's delivery to see them through.