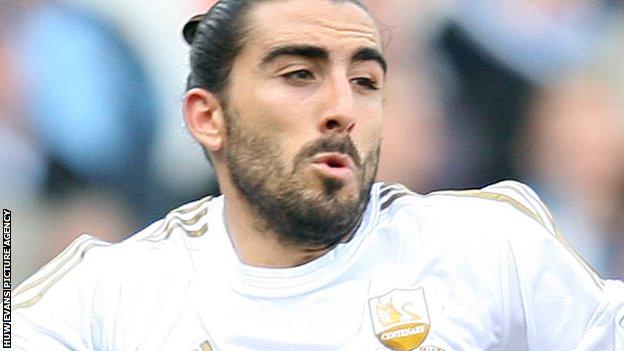 The defender missed the win at Reading as he recovers from a thigh injury.

Laudrup said Flores was back training but was unlikely to play in the third qualifying round first leg against Malmo.

"We'll have to see. We have to be careful about muscle injuries," he said.

"He's been out for nearly two weeks. He'd been training with a dead leg with a lot of liquid in his leg.

"He trained with the group [on Friday]. I thought it was too early to bring him here [to Reading], even if he wanted to.

"Hopefully he can train with us [on Monday] or Tuesday but it's not that he has to play in two, three, four, five or six days.

"We have a depth in our squad and I think you could see that in this [Reading] game.

"Because one or two players are out injured we don't have to change or drop in performance."

Swansea were comfortable 3-0 winners at Reading on Saturday with goals from Michu, Jonjo Shelvey and Pablo Hernandez.

Laudrup was pleased with his side's performance ahead of the Europa League third qualifying round first leg tie at the Liberty Stadium on Thursday.

"[It was] another step forward against a good side, who I think are one of the favourites to get back to the Premier League," Laudrup added.

"It was a very good result, scoring goals and not conceding any goals once more, so that's important as well.

"Playing in the first leg at home it's so important not to concede any goals."

The 26-year-old, who joined Swansea in 2010 revealed on Twitter on Saturday he was to undergo a medical with an unnamed club.

"I heard it should be quite close," Laudrup said.