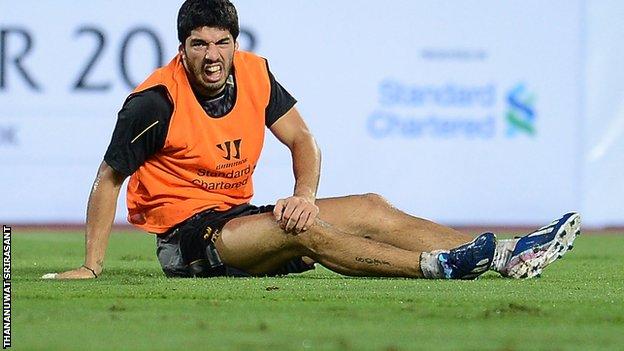 Michael Owen thinks Luis Suarez would be making a surprising career move if he left Liverpool to join Arsenal.

Last week, the Reds rejected a Gunners club record bid of £40m plus £1 for the 26-year-old Uruguay forward, who wants to talk to the London club.

"Arsenal are a fabulous club and have got a great heritage, but Liverpool are as big - if not bigger," he said.

"I'd be very surprised if he were to move to Arsenal. Madrid or Barcelona would make more sense."

The 33-year-old, who scored 40 goals in 89 appearances for England, added: "I'm struggling to understand why he would leave and stay in England with Liverpool being the stature they are."

Recently retired Owen said that the Uruguayan would be more likely to enjoy success in European competition at one of the Spanish clubs next season, rather than at the Gunners.

"From Suarez's point of view you can understand him if he wants to reach the absolute pinnacle of the game - that's playing in the Champions League. Liverpool obviously are not in that at the moment," continued Owen, who joined Real Madrid from Liverpool in 2004.

"Truthfully, can you really see Arsenal winning the Champions League next season or going into the later stages? Unless they buy a good few players then I can't."

On Wednesday, Suarez made his first appearance for Liverpool since his infamous bite on Chelsea defender Branislav Ivanovic's arm last season, coming off the bench in an 18-minute cameo during the Premier League club's 2-0 win over Melbourne Victory at the MCG.

With Liverpool 1-0 up, Suarez laid on the Reds' second for new signing Iago Aspas late in the match.

After the game, Rodgers said: "There's nothing new to report. He [Suarez] is very much a Liverpool player and over the course of the next couple of weeks we've got to get him up to speed."

On Sunday, Suarez again appeared as a substitute during a 3-0 win over Thailand.

The 26-year-old came on in the 61st minute with Liverpool leading through goals by Philippe Coutinho, Iago Aspas, the £7m signing from Celta Vigo, and Steven Gerrard.

Suarez joined Liverpool from Ajax in January 2011 in a £22.7m deal. Last season, the South American scored 30 goals in 44 appearances for the Anfield club.

1399 comments
Back to top
unknown