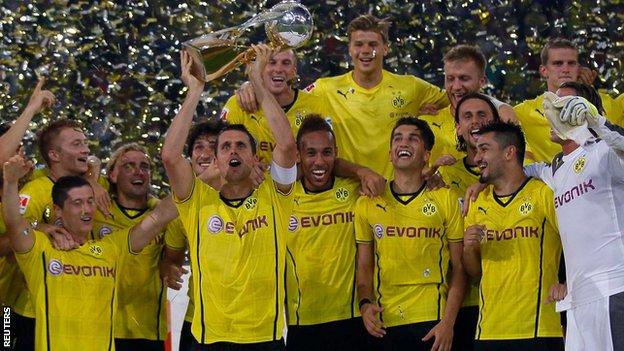 Pep Guardiola lost his first competitive game in charge of Bayern Munich as Borussia Dortmund took the German Supercup with a 4-2 win.

Bayern, who to win the Champions League, lost out as Marco Reus scored twice for Dortmund at the Westfalenstadion.

Arjen Robben - who scored the winner at Wembley - hit both of Bayern's goals.

"Even though we lost, I didn't get the feeling that Dortmund were better than us," Guardiola said.

"We still have 10 days to get ready for the Bundesliga restart and to correct our minor errors."

Guardiola, who won 13 trophies in four years before leaving Barcelona last year, has the ominous task of replacing Jupp Heynckes at the Allianz Arena.

Under Heynckes, Bayern became the first German team to win the Bundesliga, the European Cup and the German Cup in the same season last year.

Bayern were without key midfielders Franck Ribery and Bastian Schweinsteiger, while Mario Gotze - - did not feature as he recovers from a hamstring injury.

Reus headed Dortmund ahead when stand-in goalkeeper Tom Starke failed to hold on to a Sven Bender header, before Robben headed in an equaliser from a Philipp Lahm cross.

Dortmund struck twice in two minutes after the break as Bayern defender Daniel van Buyten headed in to his own net before Ilkay Gundogan curled home from the edge of the area.

Robben drilled in a low shot to cut the deficit before Dortmund wrapped up the win as new signing Pierre-Emerick Aubameyang set up Reus for his second.

Dortmund coach Jurgen Klopp said: "It was a great game, both teams ran up and down like there was no tomorrow.

"The main thing is Bayern aren't our main rivals, we are just focusing on us."