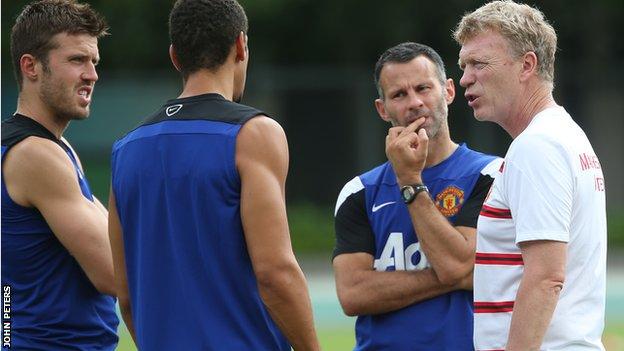 Manchester United manager David Moyes is confident he will add to his squad this summer, but has yet to decide whether he will make a third bid for Barcelona midfielder Cesc Fabregas.

with Barcelona insistent he is not for sale.

"I couldn't tell you if there will be another bid [for Fabregas]," he said.

"I never at any time said I knew we would get him. We will take stock and consider what we are going to do next."

The Premier League champions have failed with two bids for the former Arsenal player, the latest of which is understood to be £30m, plus add-ons.

United's only summer signing has been but Moyes said: "I am quite confident we will add to the squad.

"But what we have here is a really good squad of players already. You mustn't forget about the quality that is already here at Manchester United."

Moyes also revealed that captain Nemanja Vidic will feature in a friendly at Crewe on Monday after recovering from a back problem that kept him out of the tour to Asia.

Wayne Rooney - who pulled out of the tour with a hamstring injury - will not be fit to feature at Gresty Road but should be fit to face Swedish side AIK Fotboll on 6 August.

Moyes said earlier this month that Rooney was not for sale after Chelsea revealed that the 27-year-old England striker was their sole transfer target.

Rooney, currently on 197 goals, needs another 53 to overtake 75-year-old Charlton, who has 249 goals, as United's all-time goalscorer.

"I was hoping one day that he might score as many goals as I had and that would have been really nice if it was at our club - and I'm still thinking that way," said Charlton, speaking at a visit to the Laureus-supported Operation Breakthrough project.