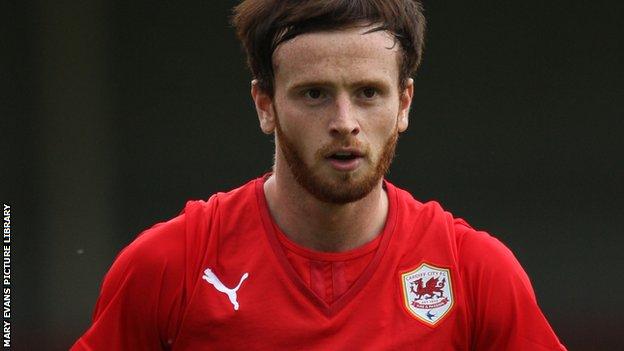 John Brayford says he has a lot to thank his former Derby County manager Nigel Clough after finalising his move to Cardiff City.

The defender, 25, made his Cardiff debut in the 1-1 draw at Cheltenham.

Brayford, who also played for Clough at Burton Albion, says the ex-England striker has been a big influence in his career.

"I've known Nigel for a fair few years now and he's always wished me the best wherever I've gone," he said.

"He's the one that took me at Burton and my career flourished under him. He's kept my feet on the ground.

"He's nurtured me through my career and he thinks [it's] another stepping stone in my career and try and take it into the Premiership now.

"He's pushed me on to this now and it's like a new chapter."

Brayford has signed a four-year deal with the Premier League newcomers after joining from Derby County in a deal believed to be worth around £1.5m.

He started his career at then non-league Burton Albion before joining Crewe Alexandra in September 2008, where he spent two seasons before Clough signed him for Derby in May 2010.

The Stoke-born player made over 100 Championship appearances in his three seasons with the Rams and is relishing stepping up into the Premier League with Cardiff.

"It's another challenge and you try and take them in your stride," Brayford added.

"Every player dreams of playing in the Premiership and to make that step up I obviously a nice feeling once it's happened.

"I've got to try and prove myself to the team and manager and try and knuckle down and work hard for everybody else.

"I know it's going to be a tough challenge but one hopefully I can rise to."

Cardiff had tried to sign Brayford during the January transfer window, while a Wigan bid for the player was rejected in June.

West Ham United will be Cardiff's opponents in their opening fixture on 17 August and Brayford is looking forward to the upcoming top-flight campaign.

"It's obviously a big step up from the Championship to the Premiership but we are relishing that challenge," Brayford said.