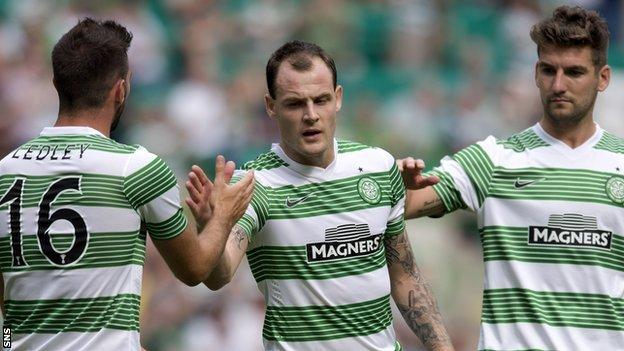 Anthony Stokes says it is up to the whole Celtic team to step up and take responsibility for providing the goal threat lost through Gary Hooper's exit.

"I always try to score as many goals as possible," said Stokes after a friendly defeat by Borussia Monchengladbach.

"But we are all going to have to dig in and try to chip in. Over the last three or four years, we have done that."

As a striker, it's always nice to be scoring goals, so I was delighted to be back on the scoresheet

Celtic manager Neil Lennon but is looking for another striker following Hooper's departure on Friday.

Stokes, who scored seven times last season, said: "We've got plenty of players in the team, even from midfield, who can score goals.

"We will all try to do as much as possible. It's on the whole squad."

After contributing Celtic's only goal in the 2-1 loss to the Germans in Glasgow, Stokes contemplated life without Hooper and said: "We've got enough players here and we just have to adapt to life without him now.

"We've lost a great player and he was a great lad around the club as well.

"But he's gone now. We have to move on and other people have to take on the burden of scoring goals."

Celtic had made a number of changes from the side that defeated Cliftonville in their midweek Champions League qualifier and goals from Granit Xhaka and Branimir Hrgota sealed the win for the Bundesliga side before Stokes reduced the deficit.

"They are a very good side and they moved the ball well," said Stokes of Borussia. "It was a tough game for us but a good workout in the end.

"I was happy enough with my goal. As a striker, it's always nice to be scoring goals, so I was delighted to be back on the scoresheet."

Celtic will return to full-strength on Wednesday, when they host Swedish side Elfsborg in the first leg of their Champions League third qualifying round tie.

"It's going to be a tough game, but we fancy our chances," added Stokes.

Elfsborg, meanwhile, slipped up in their bid to retain the Swedish title when they were held to a 1-1 draw by seventh-placed Atvidaberg.

The champions are now six points behind Helsingborgs and four adrift of Malmo, who both have a game in hand.