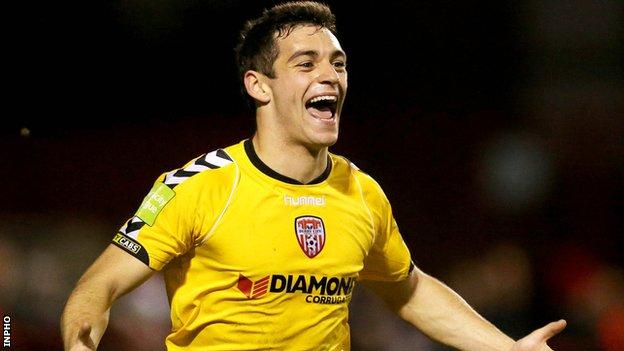 Derry have moved up to third in the Premier Division thanks to David McDaid's second-half strike against Limerick at Thomond Park on Sunday.

The Candystripes striker latched on to Sean Houston's flicked pass before firing low past keeper Barry Ryan after 69 minutes.

Derry wasted a golden opportunity to take the lead on 40 minutes when Michael Rafter missed a penalty.

City go above Sligo Rovers and lie a point behind Dundalk.

Ruairdhi Higgins went close for the visitors before referee Paul McLaughlin awarded Derry a penalty five minutes before the break.

David O'Leary's foul on Simon Madden gave Rafter the opportunity from 12 yards but the Candystripes forward saw his spot-kick saved by Ryan.

Limerick's best chance came early in the second half when Joe Gamble missed from close range.

McDaid's goal gave City a valuable three points and a morale boost three days after the 3-0 defeat by Trabzonspor in the Europa League qualifier.

Derry are back in league action on Friday night with a Brandywell clash against champions Sligo.