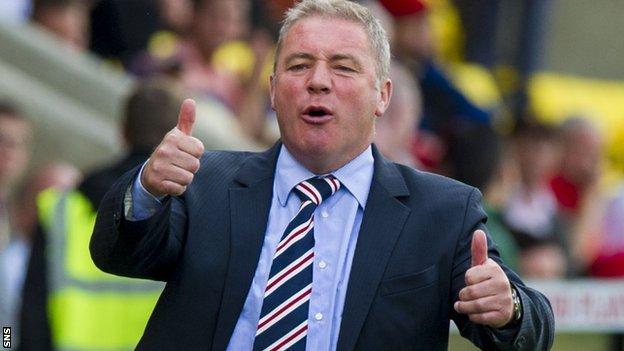 Ally McCoist praised two-goal Rangers debutant Nicky Law after a satisfying opening win to the season but insists he has not finished his team building.

The former Motherwell midfielder received a big ovation from the fans after the .

"I would consider him to be a big favourite of mine if he keeps that going, never mind the fans," said Rangers manager McCoist.

McCoist said he would particularly like to add a defender and a striker.

As trialists go, I thought the two trialists did very well

"I wouldn't say we are specifically looking at any particular area," he said after the Ramsdens Cup first-round victory.

"Defensively, we could be doing with adding to the numbers and the forward line as well."

A transfer embargo means the Third Division champions are unable to register their new signings until 1 September, so Law and Jon Daly both featured as trialists.

"As trialists go, I thought the two trialists did very well," joked McCoist. "They've done more than enough to earn a deal.

"I'm just a little bit disappointed I couldn't get any more of my trialists on, but hopefully we will see them in the near future."