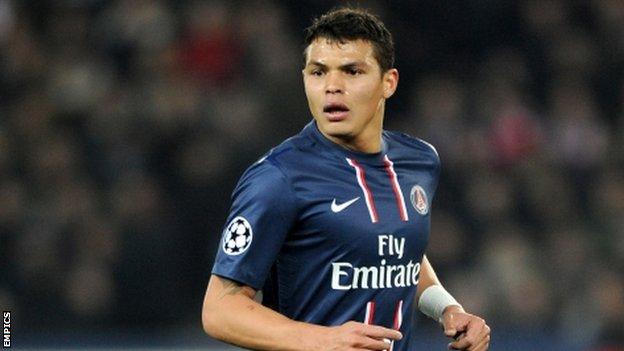 The centre-back joined the league champions in 2012, for £36m, on a five-year deal but it is understood he has extended his stay until 2018.

Barcelona were hoping to sign the 28-year-old Brazilian but his wage demands proved a sticking point before they were told to halt their pursuit by PSG.

The La Liga champions have said that signing a centre-back is a priority.

Veteran Carles Puyol, 35, suffered knee problems last season and had surgery in March, while fellow defenders Gerard Pique, Adriano Correia and Javier Mascherano were either injured or suspended during the campaign.

Barcelona had been linked with another Brazil centre-back, Chelsea's David Luiz, but in June denied they were interested in signing the 26-year-old, while Tito Vilanova was in charge.

But reports in Spain on Monday suggest that the Catalan giants - now managed by Argentine Gerardo Martino - are keen to recruit the player.

Bayern Munich were also linked with Luiz on Monday, but the European and German champions told BBC Sport they have enough central defenders at the club.

Luiz joined Chelsea from Benfica during the January transfer window of 2011 for about £21.3m and signed a new five-year contract last year.