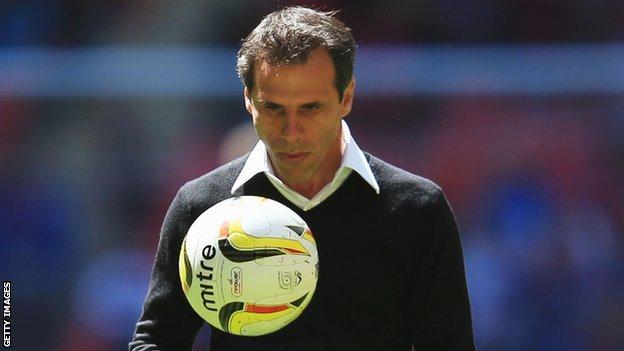 Watford boss Gianfranco Zola has said his side are more prepared for the Championship season than they were 12 months ago.

The build-up to last season was unsettled at Vicarage Road, with the arrival of new owners and a large turnover of players.

"I feel we are much further ahead than before," Zola told BBC Sport.

"I am more confident, of course. I see the team progressing very well. Things are going in the right direction."

The Italian Pozzo family, owners of European clubs Granada and Udinese, bought Watford in June last year, and they oversaw the arrival of 12 loan players from the Serie A and La Liga sides, as well as Zola's appointment.

Many of those loan deals were not completed until late August, with the season already underway, contributing to a run of two wins from the first five league games.

The Hornets recovered to reach the Championship play-off final and, although they have made 14 signings this summer, many of the arrivals have been training with the club throughout the summer and six of them were Watford players last season.

"We feel we are at a good point. You're never ready until you play a few games in the season," said Zola. "Certainly we are at a better stage than we were last year.

"The advantage is we start from last season's platform so everybody knows what is happening.

"So even the new ones fit into the system easier."

Zola, speaking after Saturday's 2-0 friendly win over sister club Granada, said he is still looking for signings in a "couple of positions".

The game highlighted the talents of forward Diego Fabbrini, a signing from Udinese, who scored his side's opener and impressed in a deep role playing off striker Troy Deeney.

"When you have the ability of Fabbrini it's just about fitting him into the system," said Zola.

"He does more or less what Fernando Forestieri does. They both play the position very well."