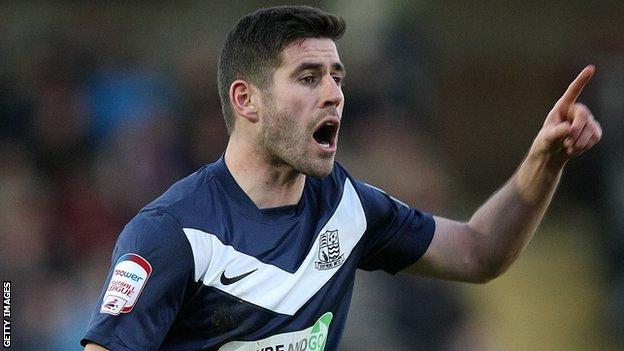 Southend midfielder Michael Timlin has said the club would have reached the League Two play-offs last season if it were not for his broken leg.

The Shrimpers were fifth when Timlin was injured, but he missed the last 17 games and they finished 11th.

"The season stopped short for me and I feel if I had carried on we would have made the play-offs," he told BBC Essex.

"That's not being big headed. That's just how it's gone the last couple of years," he added.

Timlin in the play-offs

Michael Timlin has helped sides to the play-offs in two of the last four seasons. Southend in the 2011-12 League Two campaign and Swindon in the 2009-10 League One season.

Timlin is referring to the 2011-12 campaign, his first full season at Roots Hall, when he helped Southend to a fourth-place finish and the play-offs, and the 2009-10 League One season, when he reached the play-offs with Swindon.

The 28-year-old, a signing from Swindon two years ago, has earned a new deal with Phil Brown's side, which could be as long as two and a half years, as long as he can prove his fitness.

And the former Fulham man has acknowledged he will need to win over doubters this term, not only because of his recovery from injury, but also for

"After getting injured there is expectation and after what happened in the summer there is even more expectation," he said.

"But I like that. I want to work under expectation and I demand a lot from myself.

"I've always been one that demands a lot from my team-mates. So if we demand a lot from each other I'm sure we'll do well for the gaffer."