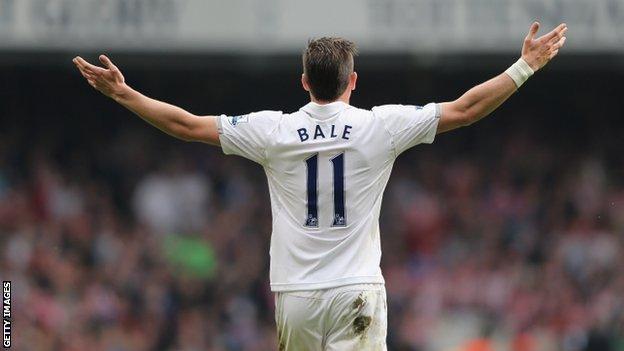 Tottenham's Gareth Bale has indicated that he wants to speak to Real Madrid, but Spurs chairman Daniel Levy is adamant the Welshman will not be sold.

Real have yet to submit a written offer, while Spurs are determined to keep the 24-year-old, even if they receive a world record bid of £85m.

Tottenham are hopeful of persuading Bale to fulfil one year of the three remaining on his current contract.

Real are expected to formalise their interest in the coming week and test Tottenham's resolve to hang to a player who scored 26 goals in all competitions last season.

Tottenham arrived back in London on Sunday from their final pre-season matches in Hong Kong. Bale did not play in either of the club's matches in the Asia Trophy because of a muscle problem.

In May, Bale's agent Jonathan Barnett told a Spanish television show that his client would be honoured to hear from Madrid president Florentino Perez.

With Real stepping up their interest, the Bale camp this weekend told leading figures at Spurs of their client's wish to be able to discuss the possibility of a move to Spain.

On Friday, Spurs manager Andre Villas-Boas refused to answer questions on Bale's situation, except to say contract talks were continuing with the man who won both the Professional Footballers' Association's player of the year and young player of the year awards last season.

It remains to be seen whether Bale plays in Tottenham's friendly against Monaco this weekend, but in Spain there are already suggestions that new Real manager Carlo Ancelotti is preparing for the arrival of the Welshman.

On Saturday, Ancelotti moved Cristiano Ronaldo away from the left flank and into a more central role during the pre-season friendly win over Paris St-Germain in Sweden, prompting speculation that the Italian is attempting to find a new system to accommodate both Bale and Ronaldo.