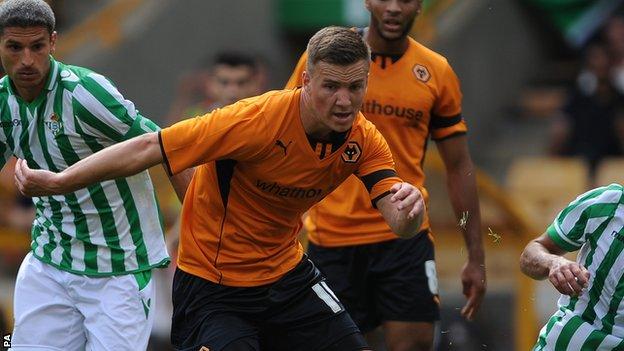 Lee Evans is hopeful Wolves' relegation to League One will give the club's youngsters a chance to break through.

Evans, 19, joined from Newport in January, but failed to play a game as they were relegated to the third tier.

"It's much better being in League One, it gives the youngsters a chance and something to aim for," he told BBC WM.

"All of the youngsters, like [Jack] Price and [Liam] McAlinden, were close to the first team last year - hopefully we'll get our chance this year."

Evans lined up alongside Wolves academy graduate David Davis, 22, and Dave Edwards in midfield in the club's 3-2 pre-season loss to Real Betis on Saturday.

Evans made 25 appearances in the Conference Premier for Newport before joining Wolves.

And the Wales youth international believes that this type of experience will help him continue his development towards the first team at Molineux.

"Dave Edwards is a full Welsh international, which is what I want to be one day, and Dave Davis came through the academy and established himself well in the team last season," he commented.

"It's good to play with them and learn off them."

Evans added that he is hopeful that the work he has put in this pre-season will pay off and he will pull on a Wolves shirt for the first time against Preston at Deepdale on Saturday.

"It would mean everything to me. That's what I've been trying to do over pre-season and it's why I'm here and train every day, to play in the big games.

"And obviously I want to play in as many big games as possible."