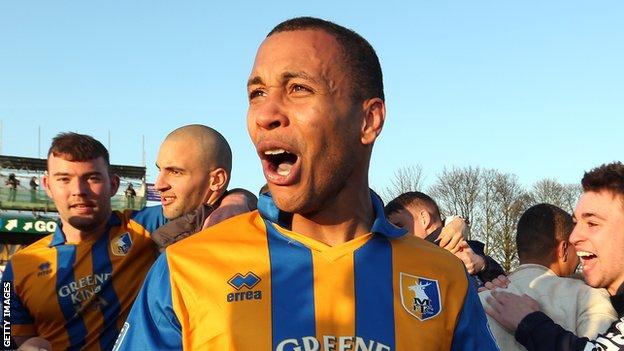 Birmingham City striker Matt Green feels he will prove people wrong by making the step-up to the Championship following his move from Mansfield.

"People are going to be thinking there's going to be a massive jump, but there's a better standard of players [around me] as well," he told BBC WM.

"If they can create chances, I'd like to think I'd be able to take them."

The Welshman, who helped the Stags win promotion back to the Football League last season, signed a two-year deal at St Andrews on the same day the club brought in Fulham defender Dan Burn on loan.

Going to some of the places away [in the Conference] in the winter months, the pitches were like a cow field

And he has paid tribute to how manager Lee Clark and his team-mates have helped him settle in to his new surroundings.

"I think the gaffer has shown a lot of belief in me already, and the players treat me like any other player," he said.

"I'm getting chances and there's been a variety of teams I've scored against this pre-season.

"If I can take that positivity into the season there's no reason why I can't [step up]."

Green added that he was grateful for the chance Birmingham had given him on returning to the Championship, having appeared six times as a substitute for Cardiff in 2007.

"Going to some of the places away [in the Conference] in the winter months, the pitches were like a cow field," he said.

"I appreciate every minute of putting a Birmingham shirt on and being a part of the team, using the facilities and playing with better players."