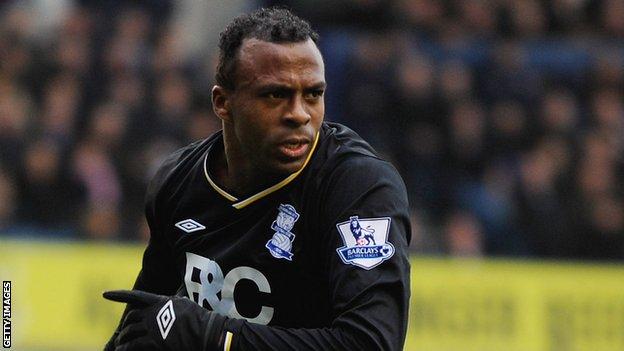 Former Birmingham striker Christian Benitez has died at the age of 27.

The Ecuador international was admitted to hospital with severe stomach pains shortly after making his debut for Qatari side El Jaish on Sunday.

Benitez, capped 58 times by his country, spent the 2009-10 season on loan at Blues from Santos Laguna but returned to the Mexican side when they decided not to sign him permanently.

Benitez, also known as 'Chucho', had been playing in El Jaish's 2-0 win against Qatar Sports Club in the Sheikh Jassem Cup.

His new club, who signed Benitez on 6 July, confirmed the news a few hours later.

Their statement said: "The club would like to offer its sincere condolences to the family of the player.

"Benitez had recently joined the club from Club America for three seasons. The player participated for the first time with the team during yesterday's match against Qatar Sports Club in the Sheikh Jassem Cup without complaining of any health problems.

"His sudden departure is a big shock for each member of the technical and administrative staff. He was a player that over the short period he was here was regarded for his high moral character."

The president of the Ecuadorian Football Federation paid an emotional tribute.

"This morning we woke feeling profound pain, a pain that all Ecuadorians share, after losing an extraordinary human being, a son, friend, husband and player," Luis Chiriboga Acosta said.

He added that the FEF would charter a flight to return the deceased player's body to Ecuador along with his wife, a process international team-mates such as Manchester United's Antonio Valencia would help with.

Chiriboga also announced that the main pitch at the national team's training ground would be named after Benitez.

Birmingham will mark the player's death ahead of Saturday's Championship match against Watford at St Andrew's.

The club said: "The thoughts of all associated with the club are with Chucho's family and friends at this very sad time.

"The Ecuador international was an immensely popular character during his time at the club."

Former Republic of Ireland midfielder Lee Carsley, who was a team-mate of Benitez at Birmingham, told BBC Sport: "It's devastating news for his family and I'm sure Birmingham City will want to pay their respects.

"I remember he had outstanding ability, was very quick and was a bit of a free spirit.

"He had a big personality and he burst on to the scene when he came on at Old Trafford [as a substitute against Manchester United in August 2009] and caused lots of problems. His ability - and goalscoring ability - was there to see.

"But he didn't really fulfil his potential at Birmingham - it was difficult because of the way Birmingham played.

"He was a popular player in the changing room, he got a grasp of the Brummie accent quite quickly and he was popular with everyone. It is sad to lose anyone like this."

"I had the pleasure to play with him. He was a top bloke. My thoughts go out to his family."

Benitez scored four goals in 36 appearances during his time in England and came to prominence during the 2006 World Cup in Germany.

The son of Ermen Benitez, one of Ecuador's all-time leading goalscorers, Benitez left Santos Laguna for Club America, another Mexican side, in 2011.