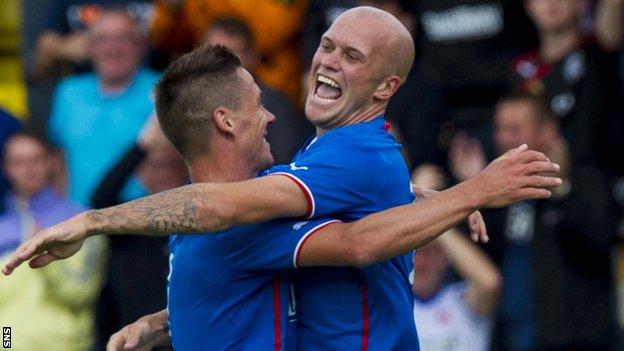 Two-goal debutant Nicky Law believes Rangers have already shown they can challenge for honours at the top level - and not just win the new League One.

The Ibrox side won Division Three last season but faltered in all three cups.

But a double that set up an impressive left midfielder Law feeling positive.

"We feel we are strong this year and can compete on all four fronts, not just in this competition and the league," said the 25-year-old.

"It was about going out today and putting a marker down so teams will look at that and know Rangers mean business and hopefully we did that."

Law, who surprised some by after they finished second in the Scottish Premier League to join a club in the third tier, relished the adulation that followed his scoring exploits.

I've said in the dressing-room, I hope they don't expect that from me every week - it is unusual for me to do that

"On a personal level, to score the two goals, it was a perfect debut and it was very enjoyable," he said.

"To hear the fans singing my name, it was brilliant.

"Hopefully they have left the ground feeling positive, not just about myself but the whole team for the season ahead."

Law scored seven times for Well in his first season at Fir Park and followed that up with six more last term but thinks he should have more chances to score with Rangers.

"Double figures is what I'm looking for," he said.

"First and foremost, you want to play well and have a positive impact on the game and I felt I did that.

"Obviously, with the goals, it is an added bonus. I've said in the dressing-room, I hope they don't expect that from me every week - it is unusual for me to do that."

With Rangers the subject of a signing embargo until 1 September, Law and Jon Daly played as trialists against Rovers, but competition rules mean they cannot face Forfar Athletic in the League Cup next weekend, or take part in the next round of the Ramsdens Cup.

"But we feel that, with the squad that we've got, we'll be fine," the Englishman added.