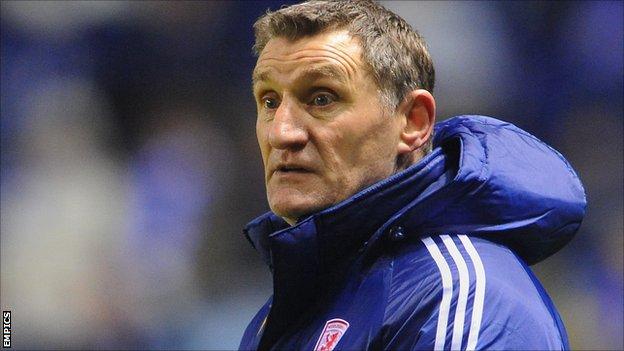 Middlesbrough manager Tony Mowbray has said he will use the loan system to give first-team opportunities to players on the fringes of the squad.

Christian Burgess is expected to complete a move to Hartlepool, as Ben Gibson did with Tranmere last term.

"Fans should expect one or two of the younger players going out on loan," Mowbray told BBC Tees.

"The benefits are there for us all to see, I've seen Ben Gibson grow since going away last year."

The arrivals of midfielder and utility player this summer have given Boro an experienced depth to the midfield, prompted by a desire to win promotion to the Premier League after last season's slide down the table.

"Young players are doing fine at our club but our target to get out of this league and at the same time develop players but sometimes that balance doesn't fit," Mowbray added.

"At times we have to get men in to get the job done, which we have with Dean and Jozef."

Marvin Emnes's return to goals was a welcome boost to the Middlesbrough management team, after the Dutchman scored just six times in 28 appearances last term.

Mowbray continues to seek further squad strengthening, but is happy with the depth of the side going into the season opener.

"We'll wait to see what this last week brings with regard to signings," Mowbray said.

"I'm happy enough and if everybody stays fit for next weekend we'll give Leicester City a really good game."